The Green River formation is an expansive group of rocks which all were lain down by a series of ancient lakes in the Eocene era of the Paleogene period. As you can see by the map below, the deposits that exist today are extensive. 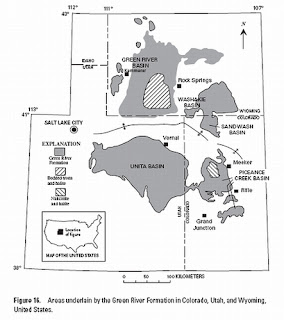 The formation is really four interconnected basins from two major lakes called Lake Unita and Lake Gosiute. The best know parts of the formation are those from Wyoming around Kemmerer where the fossil fish are quarried from the sediments of former Lake Gosiute. To the south in Colorado and Utah, fossil Lake Unita left a similar record but the rock type is a little different. In Wyoming, the fossils are generally preserved in a freshwater limestone while in Colorado and Utah the rocks are oil shale. Both lakes had similar flora and fauna and record a sub tropical ecosystem.

One of the most accessible and well know sites to collect from the Lake Unita oil shales is at an FAA radar dome near Douglas Pass. Here the rocks are considered part of the Piceance Creek basin and the most collectible shales are found in the Parachute Creek member. They are exposed as thick bedded near horizontal layers of light gray shale. The fossil finding process involves taking a piece of the shale and splitting it parallel to the plane of fossilization. The layers are very thin and it's not easy to split the rock completely on a single plane. Often you wind up breaking off a spall and you hope you find something. Unweathered rock is light to dark brown, due to the hydrocarbon content, and the preservation is quite good with thin black carbon films that contrast well against the host rock.

I've had some success collecting at this site over the years and it is a favorite of mine. Here are some pictures of specimens from my collection: 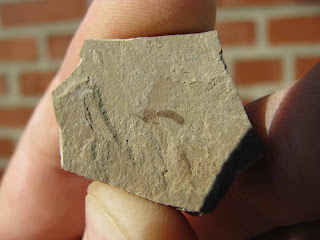 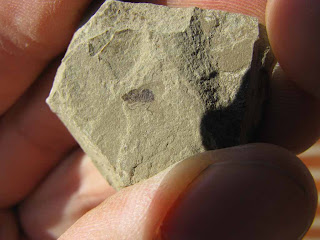 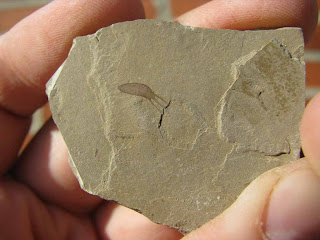 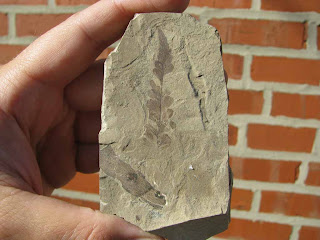 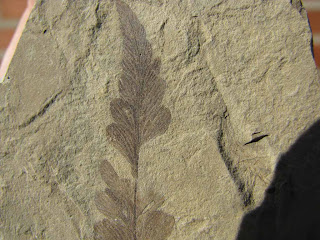 I got lucky once and found both halves of a bird feather. The detail is superb and you can see color bands as well as the texture of the feather itself. Bird feather fossils are rare but not uncommon from the Parachute Creek member. 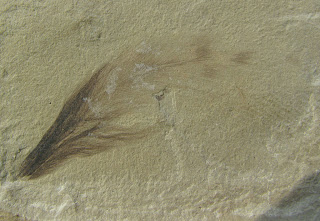 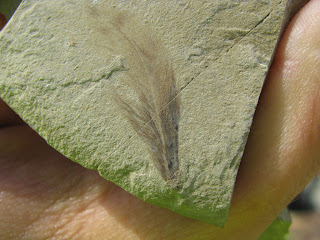 For more info on the Green River formation, check out this page at the Fossil Museum.

Or you can go the the University of California's Museum of Paleontology website and read their page.
Posted by Dave at 12:01 AM