I’ve been fortunate that my Mother’s parents lived in Boulder, Colorado as I has allowed me many opportunities to visit them and also get some mineral and fossil collecting done. During a trip in 1996 they drove me all over the state to look for stuff including to Florissant, CO for fossils and a Topaz mine, Grand Junction, CO to the Parachute Creek shale and clear up to Kemmerer for fish fossils in the Green River formation. This was to be my first trip to the Kemmerer and I’d picked one of the many quarries that were advertised in “Rock and Gem” magazine to go visit. I really wish I could remember which one I went to but all I remember is the long drive back to the quarry on a badly rutted dirt road. My Grandfather was driving and we were riding in a regular car that did not have much clearance. I distinctly recall hearing the bottom of the car scrape the tops of some of the higher bumps along the way but we made it without incident.

There were a half dozen other people there waiting for the quarry to open which it did shortly after we arrived. The quarry foreman explained what to do and where to go and I eagerly set to work picking a nice area where the rock seemed to be jutting out from a low wall. I don’t have many pictures of the quarry itself as this was back before digital cameras were cheap so all I had was a film camera. The best picture I have is this one of my Grandfather watching me try to split a slab. 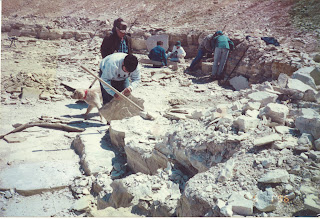 He was a great guy who wanted to see his grandson find some good fossil fish and made sure that anything I did find was moved out of the working area while giving advice on where to split. The trip was in late September so the weather was not particularly warm as you can see by our clothes.

I had visions in my head of large pristine fossil fish with every blow of the hammer and scan of the subsequent splits. The quarry foreman had explained the concept of the “split fish” layer to me but it took a couple of fish finds for me to understand exactly what he meant. The “split fish” layer is self descriptive in that the fossils will split with the layers of rock so that you often get a little bit of a whole fish on the facing sides of a split slab. You can see an example of what I mean below: 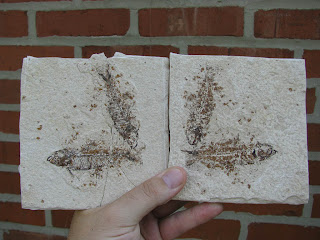 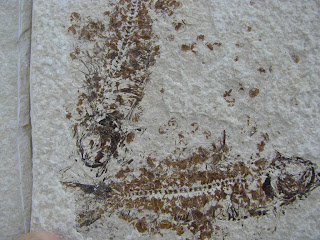 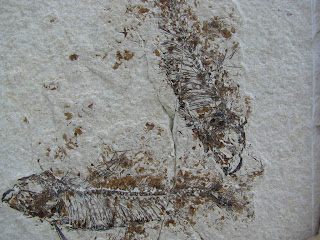 After four hours of me splitting and my grandparents watching admiringly our time was up. I had found a number of Knightia and Diplomystus and I’d nicknamed the strata we were splitting as the “Explodofish” layers since so many of the fish I’d found showed evidence of post mortem gas expulsions with scattered scales or bones. 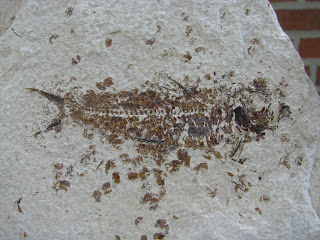 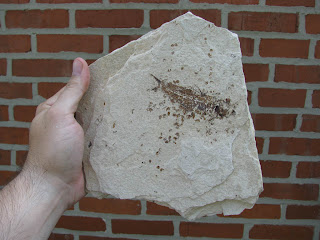 I did find two partial Priscacara and the first would have been very large but I only found half of it in many pieces. 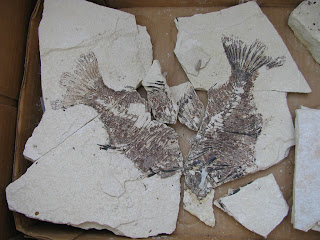 The other was a whole fish but didn’t split well so that I have some bones but the rest is just impression. It’s too bad I didn’t know about how this specimen could have been salvaged by gluing the covering split back in place and then prepping the fish through the rock so that it appeared whole. 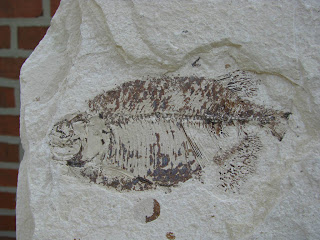 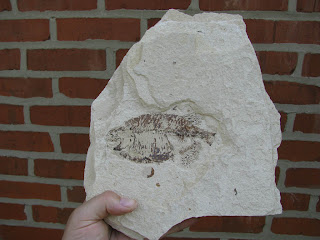 I also found some Phareodus scales and a partial jaw with teeth. 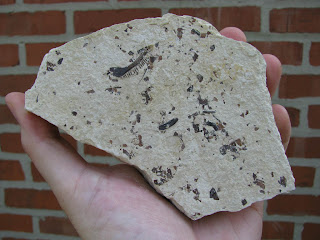 That evening we stayed at a local motel which was an adventure in and of itself. We checked in and went to our room where the door was already hanging open a little. After checking to make sure no one was in there and they motel had not double booked the room we entered into what we could only call a decorating nightmare. The walls and ceiling were painted white except for one wall which was dark purple. Before the paint had dried the workers had apparently sprayed glitter all over the place. The toilet had a constant drip and there was a hole in the floor near the base. To top it all off there was a velvet painting of the Virgin Mary above one of the beds. We were all grateful that the lights indeed turned off as we didn’t have to stare at the décor anymore and we checked out first thing the next morning. All in all it was a great trip and I enjoyed spending time with my grandparents.

A last couple of specimens that I've kept more for the memories than for the quality. 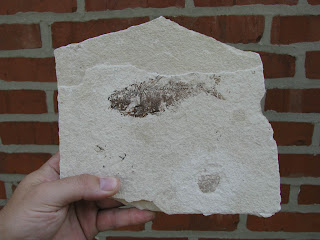 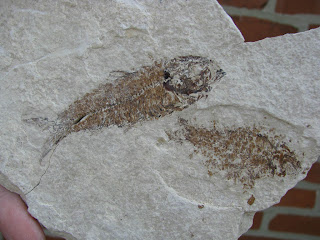