In a previous post I mentioned how my Grandparents carted me all over Colorado to look for fossils and minerals. One of the places they took me was to Grand Junction so that I could explore the Parachute Creek member of the Green River formation. One of the best known localities to access this member is at Douglass Pass which is about 40 miles north as the crow files from Grand Junction, CO. Once you reach the pass you still have another 5 miles of dirt and gravel road to drive to get to an FAA Radar Dome where the rock layer is exposed on the side of a mountain. On the way up the gravel road you pass by many exposed layers of rock which are part of the Green River formation but are not the most productive layers. Since the Green River formation is a lake deposit you get different characteristics of rocks depending on how big the lake was at the time and the environment. My grandparents patiently stopped and waited at one of these road cuts as I scrambled up and down the slope looking for fossils and amazingly I actually found some: 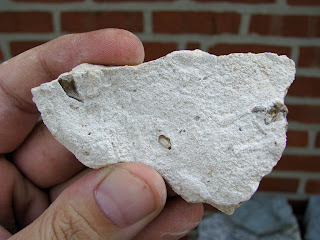 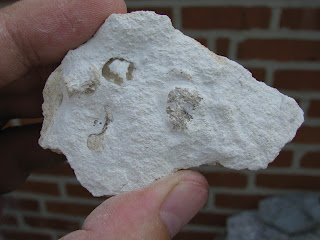 A thin, sandy horizon of rock had fallen from some part of the cut and it had some fossil fish scales and bones on it. Below is a fish vertebrate (I think) and some scales that were on one piece of rock. 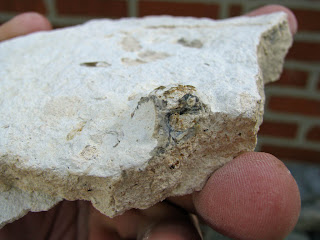 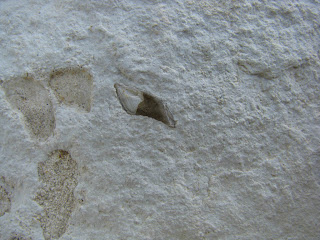 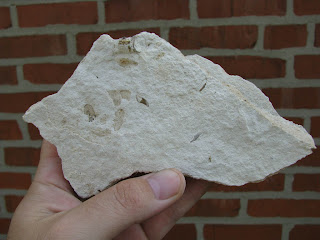 I don't know what kind of fish these fossil are from but the age is Eocene and must have been in a shallow deltaic environment for the sandy rock layer to form. I've been back several times in recent years but have not been able to locate any more pieces like those shown above nor the layer that produced them.
Posted by Dave at 12:01 AM