These next coral specimens from the Jeffersonville limestone near Louisville, KY I did not find myself but rather I purchased them from a seller on E-bay.  Below are four small sections of what I believe are Striatopora bellistriata. 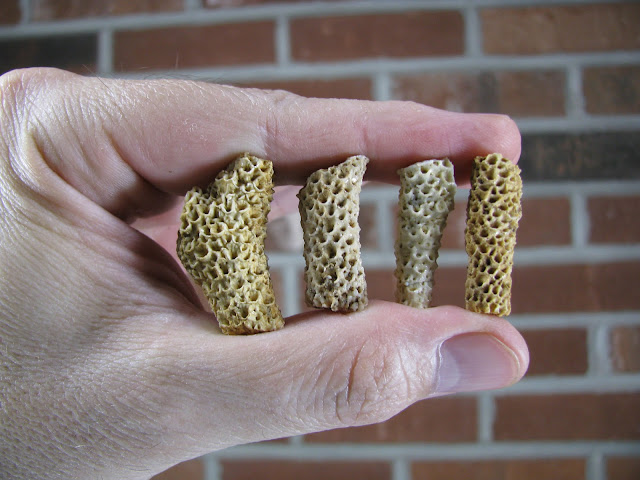 While the specimens were sent to me with only a label stating Striatopora sp., I am fairly certain these are S. bellistriata. In Stumm's book "Silurian and Devonian Corals of the Falls of the Ohio". I found only two reliable species listed on page 69 and plate 75.  The first possible species, S. cavernosa, can be ruled out due to the description requiring that the:

The specimens I have do not show that growth habit. Instead the corallites open at an angle to the branches similar to Stumm's description of S. bellistriata:

There are three other species listed but they appear to have minor differences to S. bellistriata or are too poorly preserved to distinguish otherwise.

Here is a closer view of one of the coral sections. 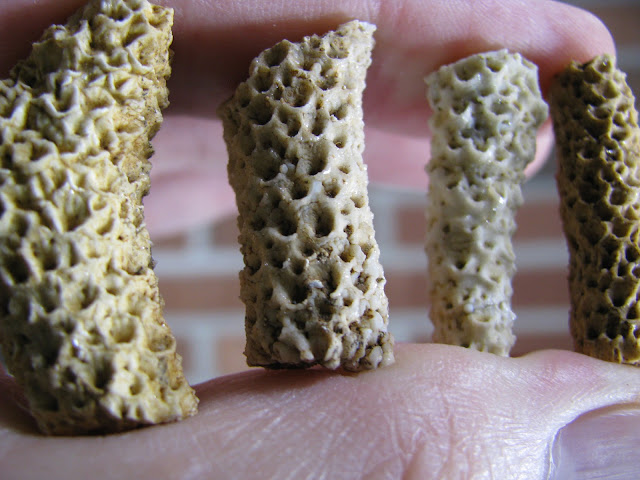 And a couple of natural cross sections of the branches. 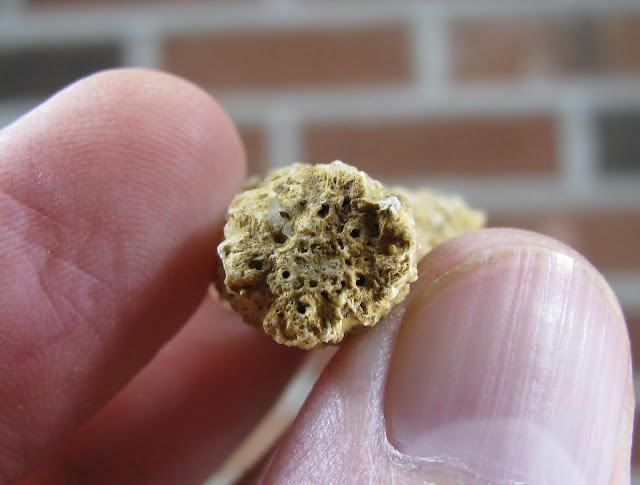 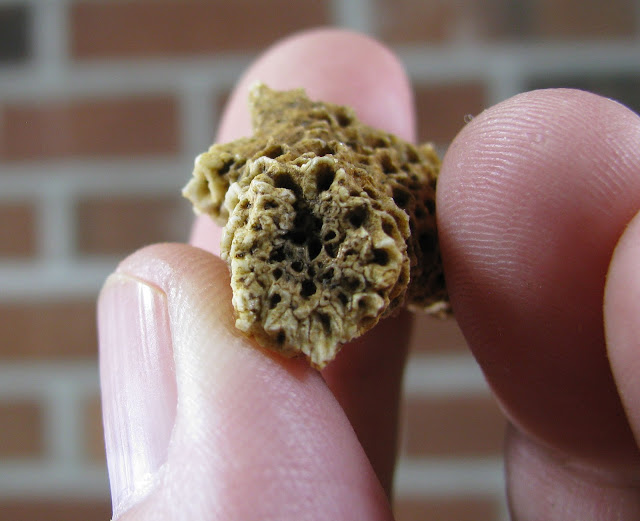 These specimens are from the Jeffersonville formation (Devonian, Eifelian stage) and come from near Louisville, KY

Among the more common corals that I have found from the Jeffersonville formation near Louisville, KY are these Emmonsia ramosa specimens.  I used the book by Erwin Charles Stumm; "Silurian and Devonian Corals of the Falls of the Ohio". to help ID and found a possible match on pages 67-68, pl 70, fig. 1-3. Here are a number of similar looking specimens. 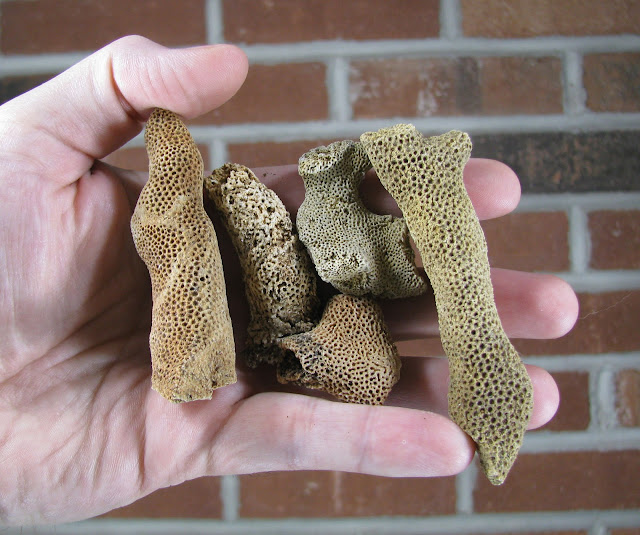 Most of the specimens I have form finger or column like growths (like the those on the far left and far right of the photo above). Those seem to best fit Stumm's description for Emmonsia ramosa.

Some of the pieces that look similar have differing growth patterns and corallites sizes so I will need to look at them more closely to see if I have other species.

Here are a few closer views of one of the pieces with better preservation. You can see some of the edges of the corallites have the squamulae (vertical line like growths that helped support the animal) preserved. 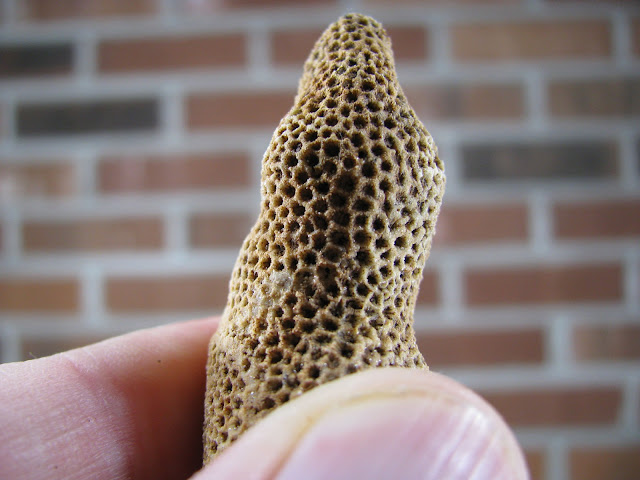 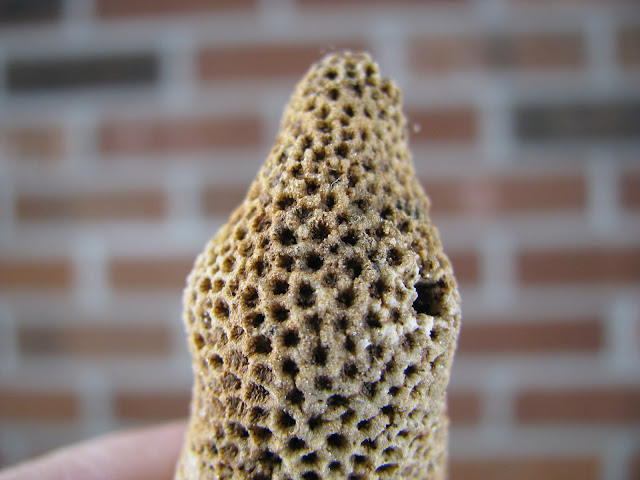 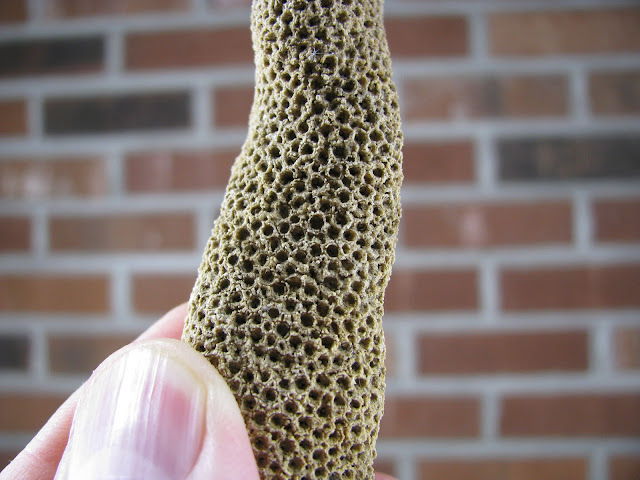 These next two pictures are views of natural cross sections through the coral. 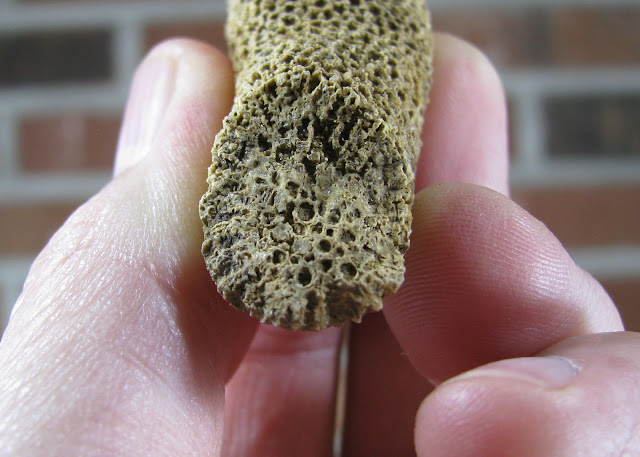 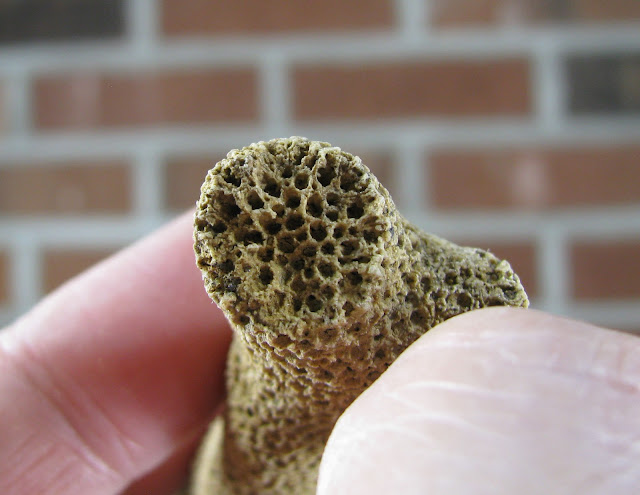 Perhaps the most important brachiopod know from the Jeffersonville limestone formation in Kentucky is Brevispirifer gregarius. It is a common constituent of the formation and even has a zone within named after it due to the abundance of fossils.  B. gregarius is a small Spiriferid type brachiopod that is roughly half moon shaped when viewing the dorsal surface of the brachial valve. The two valves are both convex with the pedicle valve a bit more than the brachial. The interarea of the pedicle valve is slightly recurved with a well defined "V" shaped foramen. The surface of both valves have coarse radiating ribs and a fold/sulcus feature.

I've seen exposures of the B. gregarius zone in the Jeffersonville formation that is full of dis-articulated valves. Whole specimens can be found but are generally the exception rather than the rule. These diminutive brachiopods must have been densely packed on the seafloor to have so many shells be found. Interestingly I have only ever found the dis-articulated pedicle valves to be able to collect in the colluvium. 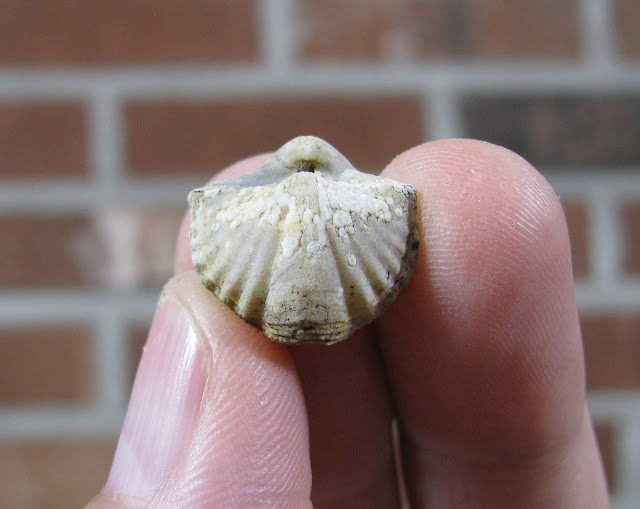 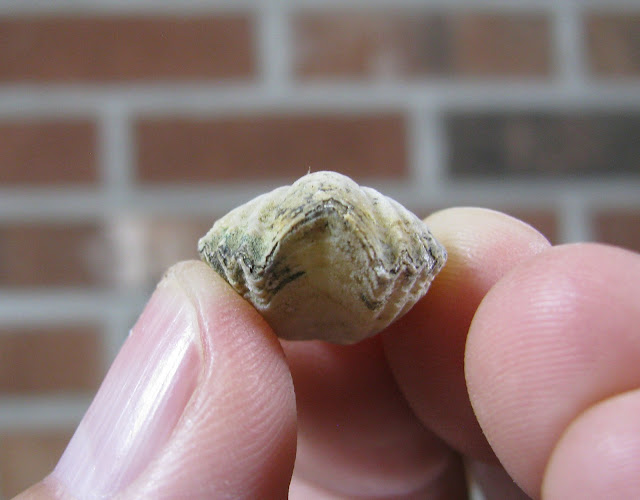 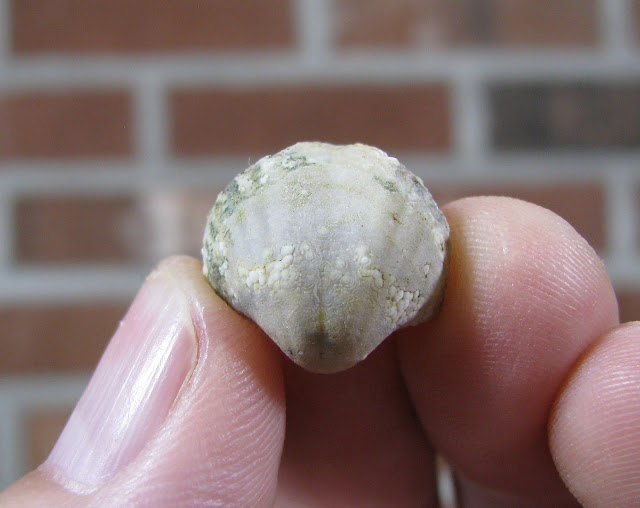 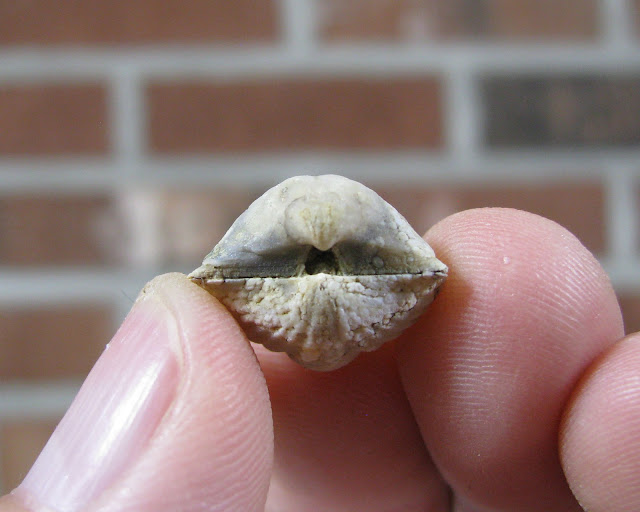 Another posterior view with the shell rotated 180 degrees. 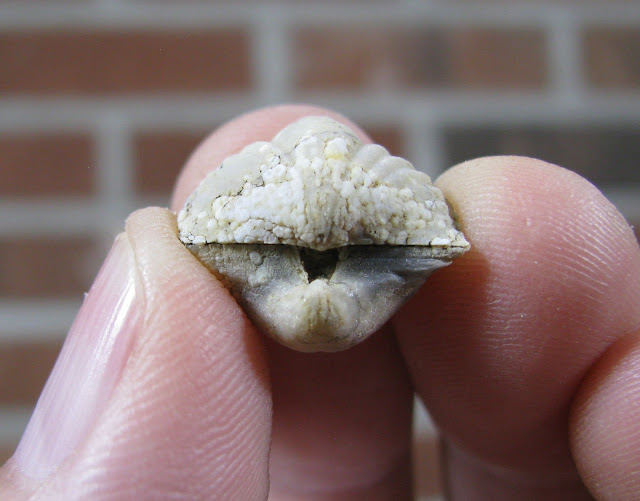 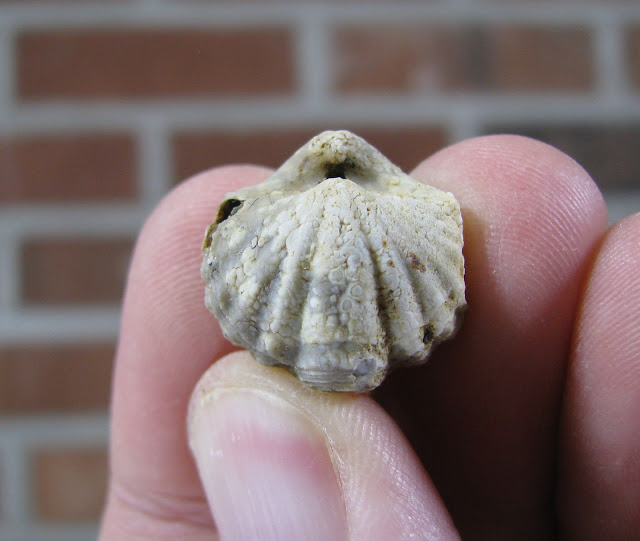 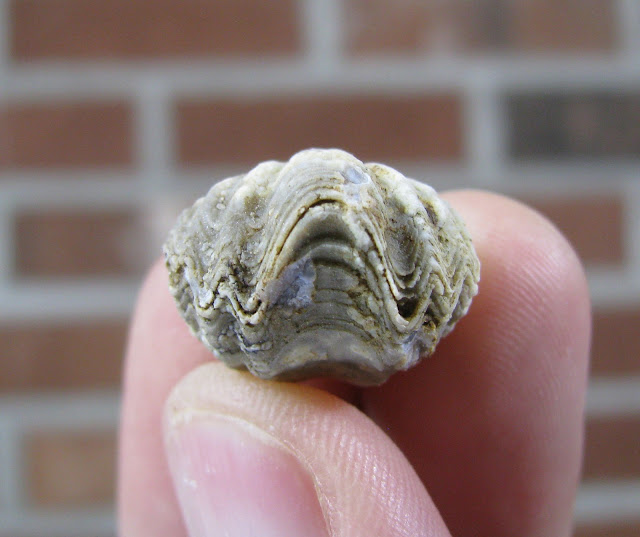 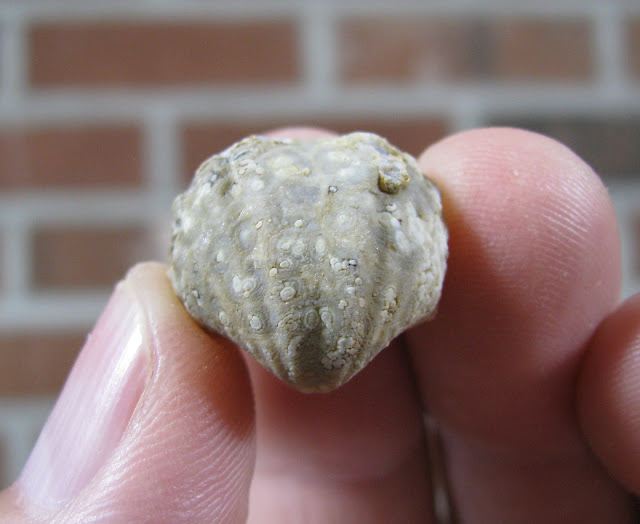 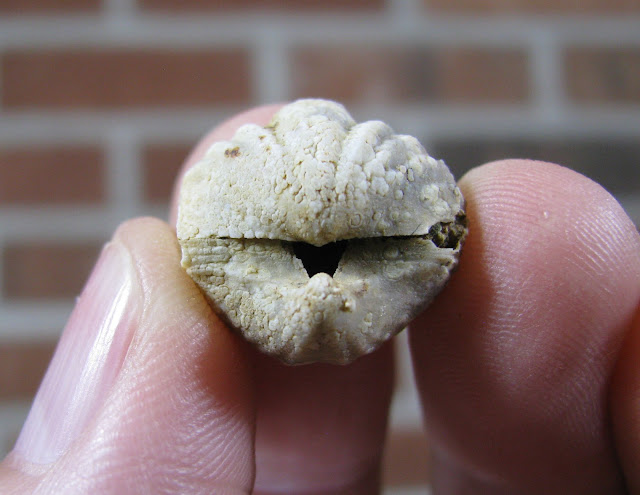 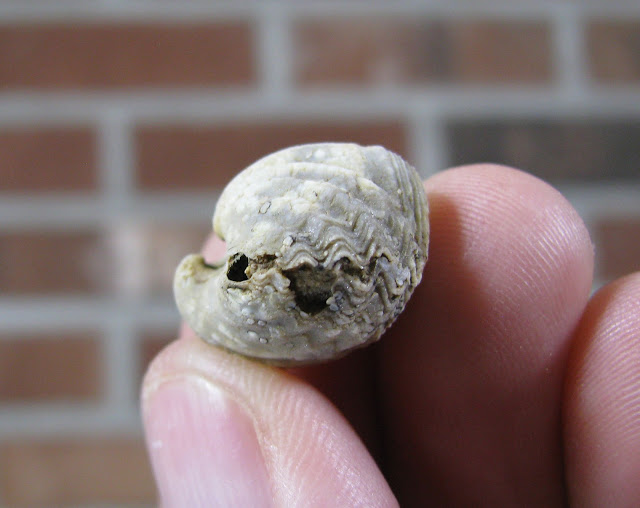 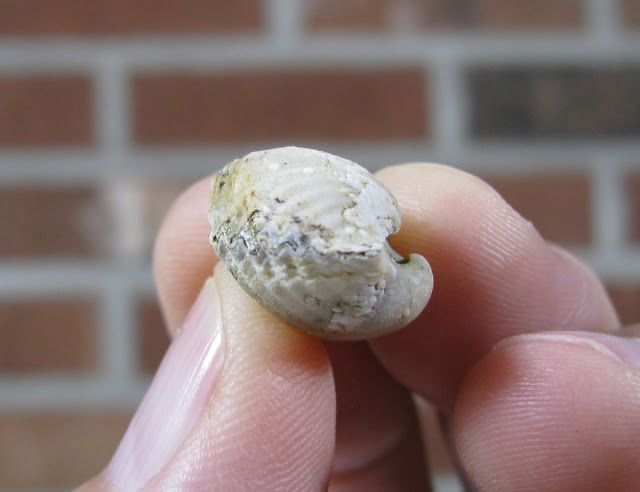 These next two pictures are of a partial, dis-articulated pedicle valve interior. 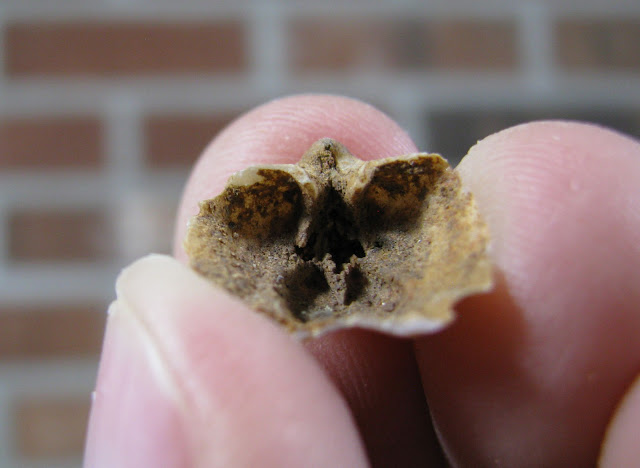 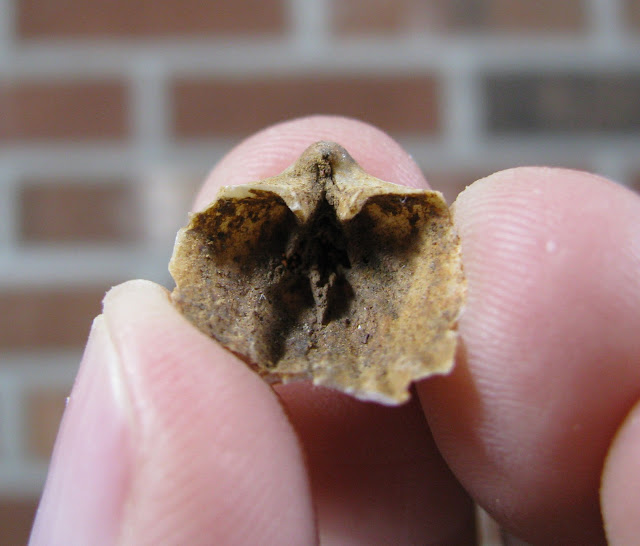 Another dis-articulated pedicle valve interior.  The difference in features could be a result of incomplete preservation and replacement by the Quartz. Both were collected from the same horizon in the same roadcut. 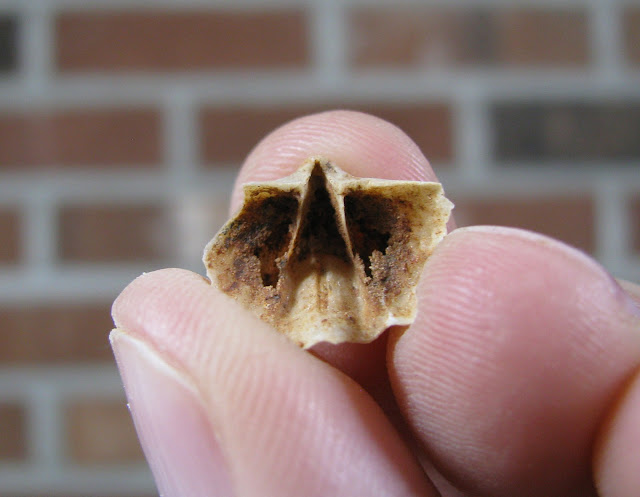