I'm going to do a series of posts over the next week that will focus on the famous Green River formation. I wanted to give some background first so that you, the reader, would have some idea of the places and names I'm referring to.

The deposits in Wyoming are from two ancient lakes. The smallest is called Fossil Lake and the the primary producer of the fish fossils. Lake Gosiute is the larger lake and was confined to an area from Kemmerer east to Rawlins and from the Wyoming/Colorado border north to the Wind River mountain range. Lake Unita was the third and longest lasting of the ancient lakes and covered a region of Utah and Colorado from Provo, UT east to Meeker, CO and south to Grand Junction, CO. Lake Unita's deposits are often in the form of an oil shale and are finer grained than those of Fossil lake or lake Gosiute.

Here is a series of rough maps that show the approximate geographic extent of each lake through time. 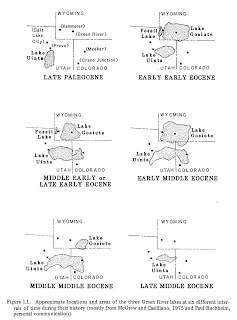 This is a stratigraphic view of the lakes through time and geography. 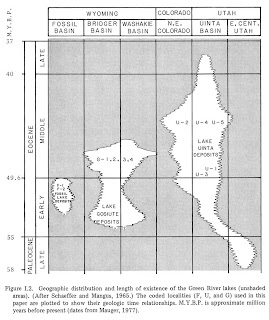 This is a map of the current geographic extent of the rock deposits derived from the lakes. 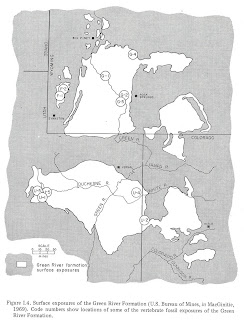 During the Eocene the lakes existed in low lying areas within a wet, subtropical environment but since then they have been elevated many thousands of feet above sea level and are mostly in a high desert environment.

I've had the opportunity to collect from, and will detail more in the next few posts, the Fossil Lake deposits at Kemmerer, Lake Gosiute deposits at the "Blue Forest" and Wamsutter as well as the Douglass Pass deposits of Lake Unita.


This last chart is one which correlates the many geographically distant deposits with each other. 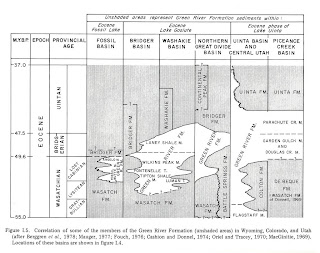 The illustrations used in this post are all from the book "Paleontology of the Green River Formation, with a Review of the Fish Fauna" by Lance Grande and was published as Bulliten 63 by the Geological Survey of Wyoming. This is a most excellent resource and, while it focuses more on the Fossil Lake fauna, I highly recommend it to anyone who wants to learn more about the Green River formation.
Posted by Dave at 12:01 AM