"Turritella Agate" is a well known and popular stone that is composed of the fossil shells of a high spired snail called Elimia tenera. The name Turritella is given to the fossils because it looks similar to that family of gastropods, but they are confined to salt water whereas these snails lived in fresh water. The agate itself is considered to be a slightly to completely chalcedonized coquinite.

Here is a polished piece: The rock formed along the edge of ancient Lake Gosiute and is part of the Green River formation. The accumulations of all these shells must represent a very productive ecosystem and is known to occur in several different stratigraphic horizons within the formation.

I had the opportunity to collect some of the rough stone during a trip a few years back. The best area to collect is south of Wamsutter, WY along the rim of a regional cliff system. 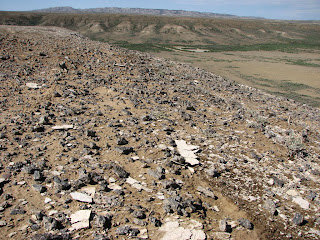 There are lots of small pieces scattered around that are perfect for kids or specimen hunting. 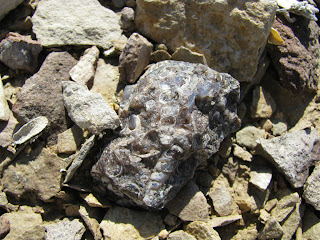 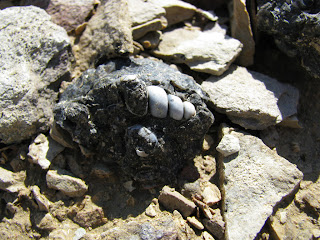 Some of the individual snail shells have weathered out and are available for surface picking. 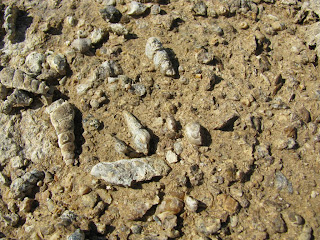 The material that makes for the best displays has the snail shells oriented parallel to the display surface like in the first polished picture or the field picture below of a rough specimen. 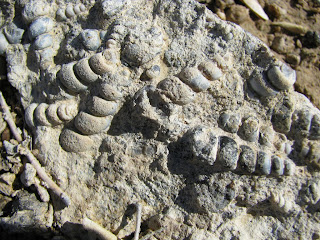 If you cut the rock perpendicular to the shells, this is the view you are likely to get: 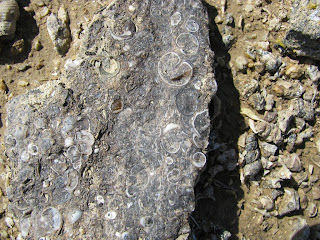 The trip to the site was fun and full of nice badland like scenery. A visit can be accomplished with only an hour or so drive from Interstate 80 and makes for a good rest stop when crossing Wyoming either to or from Kemmerer.
Posted by Dave at 12:01 AM