Halysites is a common, reef forming fossil coral from the Silurian period. It's such a well known and common coral that it's considered an index fossil for Silurian aged rocks. I have searched my local Silurian limestones looking for a specimen but have not been lucky as of yet. Halysites is also one of my favorite fossil corals because of it's unique growth pattern. The coral forms colonies of connected tubes that look like chains when viewed from above. Unlike other contemporaneous corals, it liked to leave space randomly between the individual corallites (the space in a coral where the polyp like animal actually lived).

My good friend Mike, from over at Louisville Fossils, sent me some terrific specimens, during one of our regular fossil exchanges, that he found in his local Silurian aged rocks . He's also got some good info on how he ID'ed the fossils and where he finds them over on his blog.

Here is a portion of a large colony that has been replaced by quartz while the rest of the limestone surrounding dissolved away. You can see the chain like shapes formed by the animals. 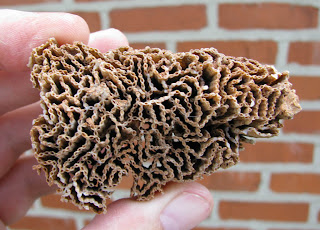 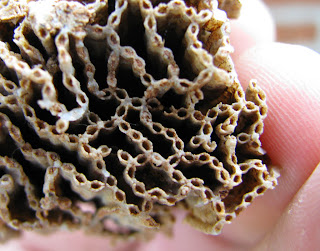 A side shot shows that the individual corallites maintain their linked state down towards the base. I actually wonder how long it took to build this 1.5 inch thick section? 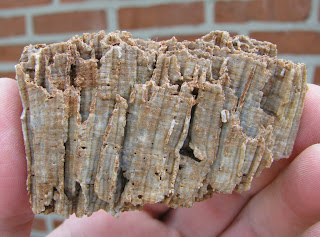 Here is another specimen that is still partially encased in Limestone/Dolostone. The last picture shows what you might see in the field if the fossil has only partially been exposed by erosion. 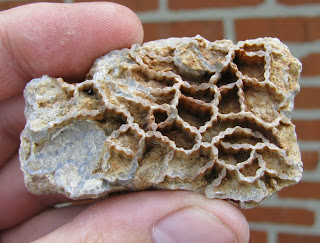 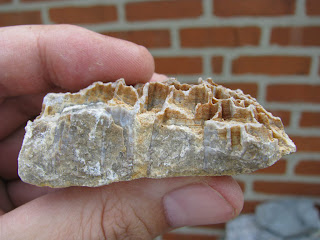 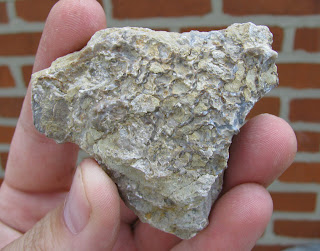 After Mike sent me these specimens I realized that I did have a specimen of Halysites that I'd found many years ago. I was visiting my Dad's parents house in Milwaukee, WI and there had recently been some excavations in their yard. A new sewer line had been placed to the house from the road (previously they only had a septic system) and the company that installed the pipe left a large amount of fill on top of the trench. There was more material on the surface than had been previously excavated and so we set to work moving it to other parts of the property. While moving a load of the fill my sister pointed out a strange rock to me. 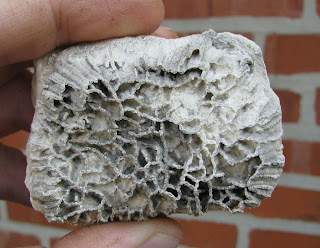 I had no idea what it was but hung onto it for years and was finally able to ID it as a Halysites colony once I compared it to the specimens Mike had sent. It's preserved in a very fine grained sandy dolostone and while you can tell what it is from the overall features well enough, I'm disappointed that the corallites are not defined very well. 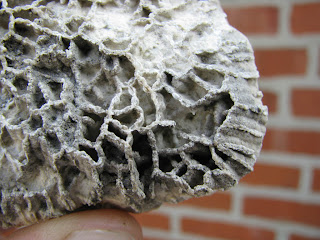 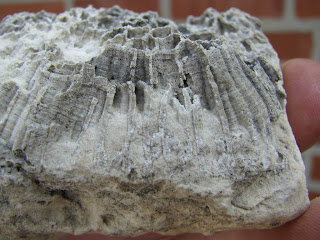 Since I found this so many years ago there is probably no way to determine which formation it came from.
Posted by Dave at 12:01 AM