Results from a short visit to the Florissant Fossil Quarry

As part of my vacation last fall I had an hour or so to kill in my schedule and happened to be passing near Florissant, Co. The town is well known for the Florissant Fossil Beds National Monument which preserves an ancient lake bed from the Eocene that was near a field of volcanoes. The volcanoes would erupt with lots of ash and this would rain onto the lake and the surrounding environment. As the ash settled it would cover anything that happened to be floating on or above the lake surface. The ash layers deposited as thin films and millions of years later have been compressed into "paper" shale (so called because each layer is as thin as a sheet of paper). Splitting the shale is easy but also hard. You have to use a very thin, sharp blade (a razor blade is perfect) to split the fine layers. If you are lucky you will find an insect or plant trace from long ago.

Outside of the park boundaries is a fee quarry, on private land, that allows you to split some of the paper thin shale and keep the fossils you find. It's called the Florissant Fossil Quarry and I've been to this site several times over the years. You can see some of the other fossils I've collected  by clicking here, here, here, or here. This trip only allowed me a hour but I found a few interesting specimens.

This is a small snail with a partial leaf. The shell has been crushed but you can still see some of the shiny nacre. 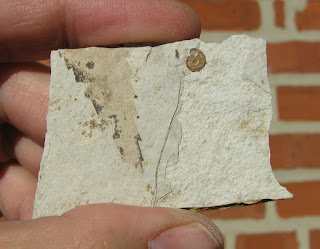 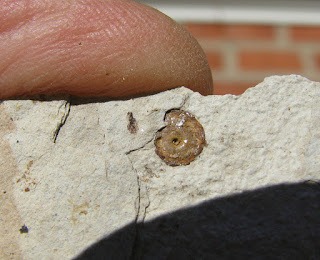 A beech or elm type leaf 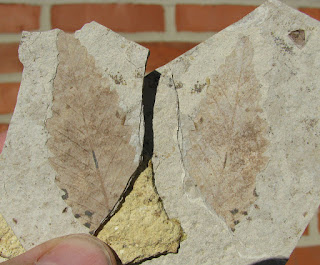 A seed of some sort, although it looks like the seed itself is missing and only the surrounding "wings" are left. This looks similar to slippery elm seeds. 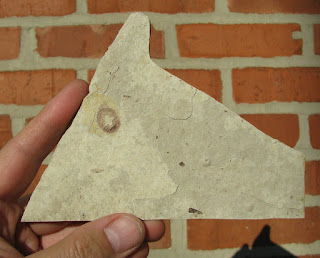 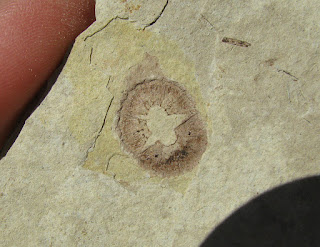 Lastly, a fly or bee (wasp?) of some sort. The preservation is not the best and it looks better from a distance than up close. 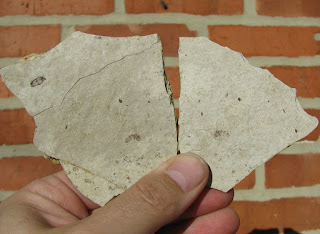 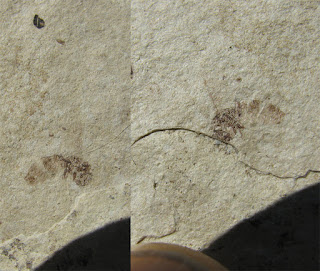 The Florissant fossil beds are called the Florissant formation and are dated to the latest Eocene epoch (Priabonian stage) of the Paleogene.
Posted by Dave at 12:01 AM