As I was driving through Oklahoma, on US 177 south of Sulphur, I approached a large roadcut and stopped to investigate. This roadcut had been a target of mine when I was planning my trip. It appeared to be exposing Ordovician aged rocks and my research told me that the cut exposed the Viola formation which overlies the Bromide formation. Having never sampled either unit I was hopeful to find some fossils.

Here is a panorama of the east side of the cut, North is to the left. Click the picture to see more detail.

The light colored rock that makes up the bulk of the exposure is the upper part of the Viola formation. It is a light grey limestone with nodules and some chert. I didn't find too much in it, just a portion of a trilobite (see below).  The right 1/3rd of the cut, in the photo above, appears to be the lower part of the Viola formation with darker grey limestone mixed with brown, more argillaceous (containing more clay) rock. It was within theses layers that I found some brachiopods and lots of bryozoan fossils. The Viola formation (or Viola group in some references) is upper Ordovician in age, roughly Katian stage.

I'll detail some of the more identifiable finds in upcoming posts but here is the isolated trilobite fragment I found in the upper Viola formation rocks. It appears to be either the partial cephalon or pygidium from an Illaenid type trilobite like Bumastoides sp. or Thaleops sp. 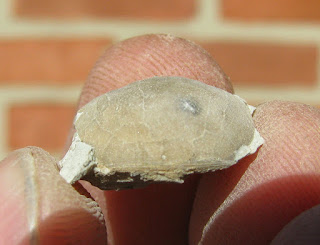 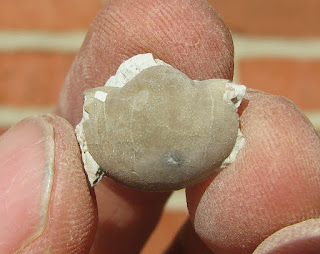 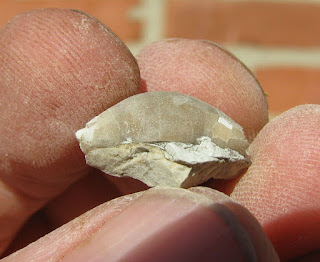 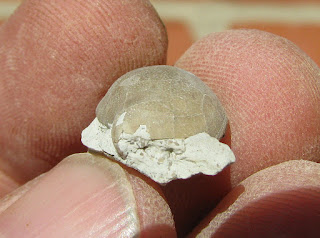