Another pretty cool looking oyster that I found in the Texas creek I was exploring is Peilinia quadriplicata (also called Ostrea quadriplicata). This species is very easy to ID based on the look of the shell. I only found a left valve but it has the typical splayed look to it, kind of like a duck foot. While the shell started out with a relatively smooth margin, as the animal grew older it started to have some distinct "points" with flat, straight areas of margin between them. Overall the shell is subpentagonal in shape with some obvious, widely spaced growth lines. There is also some gentle undulations on parts of the shell. The interior of the valve is smooth with a scallop shaped indentation where muscles once attached. 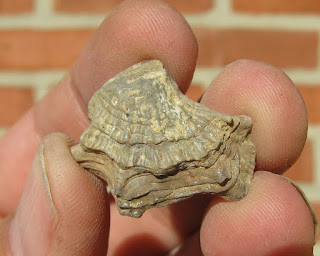 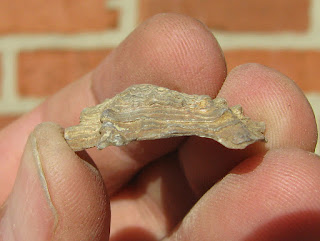 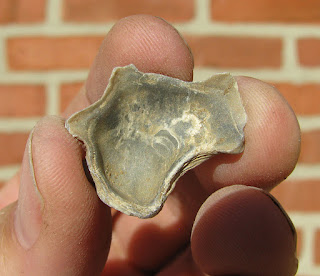 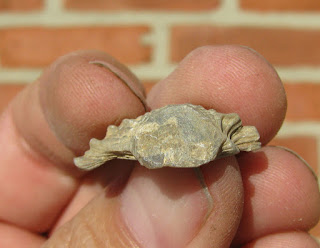 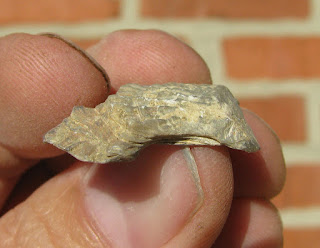 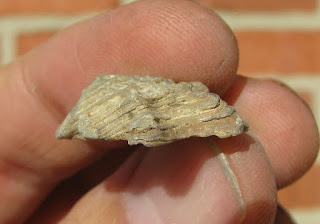 I found the above specimen in a creek that cuts through the Duck Creek formation but P. quadriplicata is not found in those rocks. Likely this washed downstream from a higher, younger formation such as the Denton Clay or Paw Paw formation which are Cretaceous (Albian and Cenomanian stages respectively) in age.
Posted by Dave at 12:01 AM