Lichenalia torta? bryozoan from the Moscow formation of New York

Within the rocks of Fall Brook, near Geneseo, NY, sometimes you'll find odd dark colored fossils that look as though someone poured chocolate on the rock. I knew it was a fossil of some kind but getting a piece to reveal itself face up was not an easy task. So I kept a few pieces in the hopes that one day I would figure out what it could be. Now I may have an answer. While I was looking through the plates within the Paleontology of New York, volume  VI, I came across an illustration that appeared to match what I'd found.

Here is the specimen. You can see that it looks like the underside of a shelf fungus and most likely is the wrinkled epitheca of some genera of bryozoan or coral. The epitheca is the surface of the animal that was in contact with the underlying substrate that it laid upon. You won't see this if the animal encrusts a hard surface, such as a shell or rock, so this indicates that it was in contact with the seafloor itself (or possibly held above it) the undulating shape of the fossil makes me think it was laying on semi solidified mud. 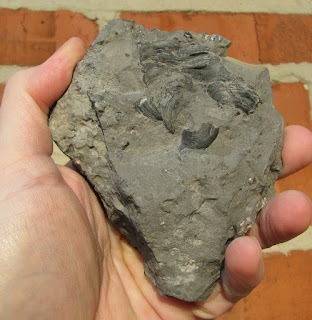 Note near the bottom of the wrinkled area appears to be a Platyceras type gastropod shell. Perhaps that was the origin point for this colony? 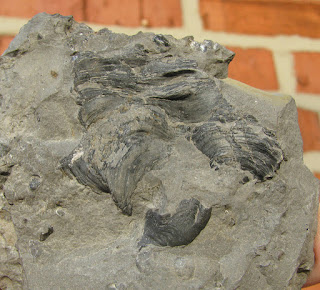 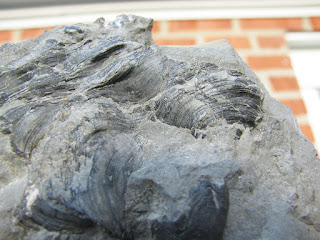 It is a very thin fossil which could indicate that it grew very quickly, it grew up and out as the lower portions became smothered by sediment or the overall growth pattern was horizontally rather than vertically. 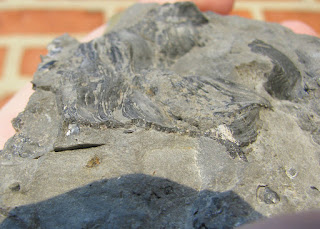 Since the fossil had a very unique appearance it stuck in my head. As I was looking through volume VI of the Paleontology of New York, I saw plate XV and recognized the illustrations as resembling what I'd found in Fall brook. 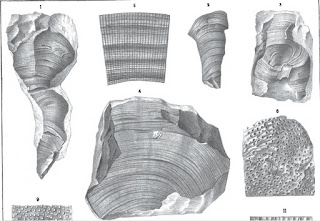 The description of the plate said they represent a bryozoan called  Lichenalia torta and had been found in the "Lower Pentamerus limestone" at Schoharie. This presents a problem as that particular horizon is considered part of the upper Silurian (Pridoli stage) while my specimen comes from the Moscow formation which is middle Devonian (Givetian stage). So while I may not be able to say for certain that what I found is indeed Lichenalia torta, It perhaps is a related species and I will have to wait until I can get a piece that shows the dorsal surface to determine the species.
Posted by Dave at 4:50 AM