Another Bryozoan that I've been able to identify from fossils I found near Lockport, NY in the Irondequoit limestone Rochester Shale,  is Chasmatopora. This genera has a similar lacy fan structure to it like the more commonly recognized Fenestella but one of the differences is the shape of the gaps within the fan. In Chasmatopora the openings are rounded to ellipsoid while in Fenestella they are rectangular. This is not a trait which should be used to differentiate between genera in every instance however it works well for the fauna of the Rochester shale. 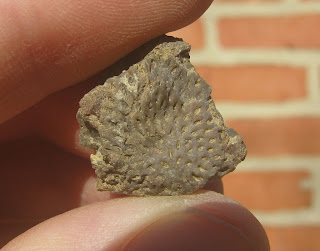 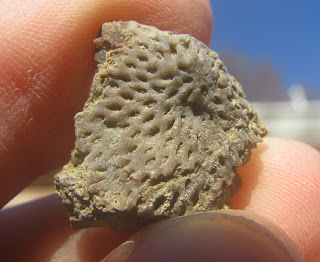 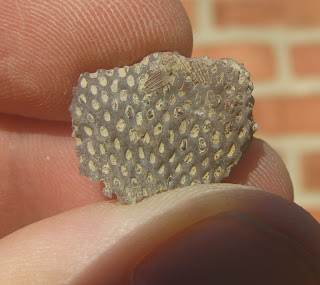 Closeup of the above specimen. This is the back side of the colony and you can see striations running along the length of the segments. 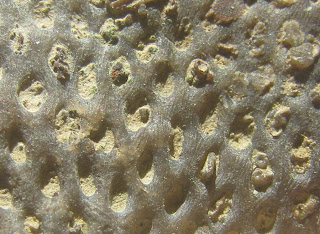 While the last two specimens were somewhat isolated, this third specimen is still in the matrix. You can see all the debris it has been swept up with which includes Crinoid columnals, pieces of Bryozoans, Brachiopods, Trilobites and Ostracods. Due to the broken nature of most of the fossils in the rock I would think they were accumulated and deposited after a storm event. 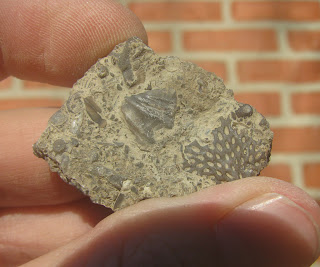 The Irondequoit limestone Rochester Shale is Silurian in age (Wenlock series, Sheinwoodian stage). This lead me to ID the specimens above as Chasmatopora asperato-striata after viewing the Primitive Worlds website here. I have also been able to independently confirm that this species can be found within the Irondequoit limestone and Rochester Shale after reading "The Clinton of Western and Central New York" by Tracy Gillete (1947).
Posted by Dave at 12:01 AM