Emanuella praeumbonata from the Mahantango formation

Ambocoelia umbonata is a fairly common species in Hamilton group aged rocks but I hadn't encountered it in the Mahantango until my visit Thanks to Jack K. for pointing out that the fossils below, that I found at the pit near Roseburg mentioned here, are actually Emanuella praeumbonata. Below are pictures of a slab of calcareous shale from the pit with impressions and whole shells embedded in it. 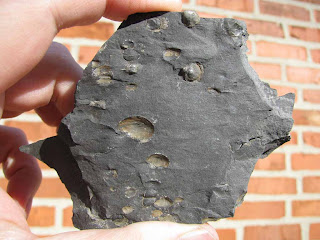 Note the slight distortion of the shells and how they all distort in the same direction. This is evidence that the rocks stretched slightly when they were folded during the formation of the Appalachian mountains. This makes sense since they are located on the bending edge of a syncline (a "U" shaped fold of rocks). Below are impressions of the pedicle valves of Ambocoelia umbonata Emanuella praeumbonata. 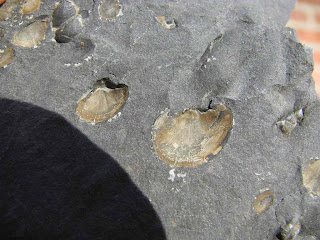 These are whole shells still embedded within the shale. Note that there is one oriented with the pedicle valve down (with relation to the bedding plane of the rock) and one with the brachial valve oriented down. This tells me that the shells are not likely in life position but likely were tumbled from their original location and buried during a storm event. The fact that the shells are articulated (meaning they have both valves attached together still) is yet more evidence for that scenario. 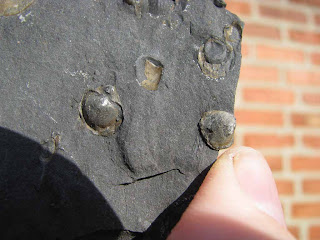 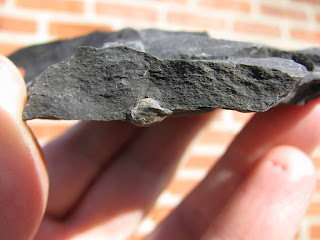 I've found Ambocoelia umbonata before from the Widder formation (Hungry Hollow member) at Arkona, Ontario and the Ludlowville formation (Wanakah shale) at Lake View, NY and the general shape and size of those specimens are what lead me to jump to my earlier conclusion that the specimens I'd found at the Roseburg pit were the same genera.
Posted by Dave at 12:01 AM