While exploring a newly discovered pit near Roseburg, PA I found a new genera of Trilobite for my collection. I think it's a Basidechenella but some details are missing. Below is the fossil which is a cast of the original fossil since the calcitic shell has long since dissolved away. 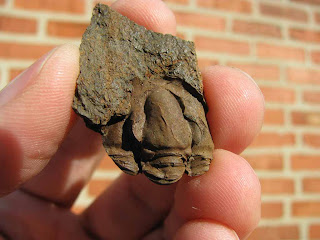 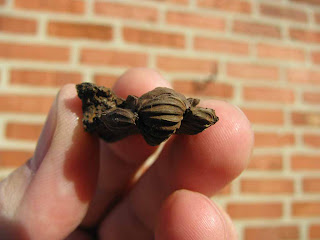 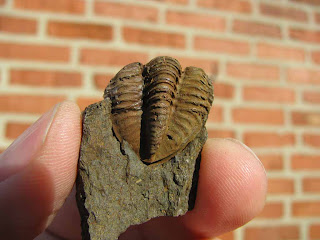 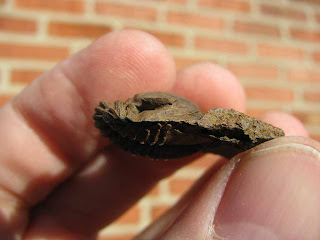 I'm positive it's not the more common genera Phacops because the glabella (the "nose" like part between the eyes) is much narrower and lacks the sensory bumps. The rest of the cephalon (the head) displays a margin around the edge which is also lacking in Phacops.

The fossil was found in rocks from the Mahantango formation which is middle Devonian (Givetian) in age. At this locality the Mahantango transitions into the upper Devonian (Fransian) aged Trimmers Rock formation (Equivalent to Lockhaven formation elsewhere in PA and the Wiscoy formation in NY). As the fossil was found in a rubble pile I can't say for sure that it is definitely from the Mahantango but then again, I can;t for sure say where the division line is between the Givetian and Fransian aged rocks as there is no unconformity. Normally I'd look for the Tully Limestone but that is generally not present in the Hamilton group rocks of Central PA.
Posted by Dave at 12:01 AM