Fenestellid bryozoan from the Mahantango

Among the fossil hash layers resent at the quarry in Roseburg was this suprisingly large example of a Fenestellid bryozoan. I last showed you some interesting Fenestellid bryozoan pieces about a year and a half ago in this post, but the specimen below is a new high point for me.

The specimen covers the face of the matrix to a width of about three inches and a height of one inch. It is preserved as a negative mold of the original calcareous skeleton. 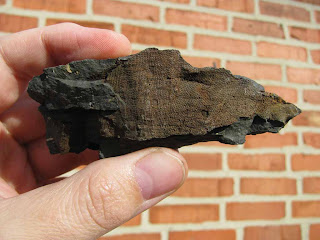 The individual zooecia are very small but preserved well enough that I can see the growth pattern of the colony. Each of the little round dots that you see are the negative spaces between the skeleton. The zooecia are even smaller and can only be viewed with a strong magnifier. 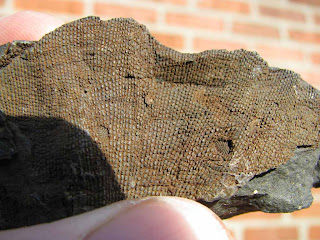 Another of the fascinating aspects to this fossil is seen when viewed from the bottom as though you had laid the specimen flat on a table. If you look closely you can see where other sections of the Fenestellid are lain down parallel to each other. This implies a 3-D structure of some sort when the colony was alive. 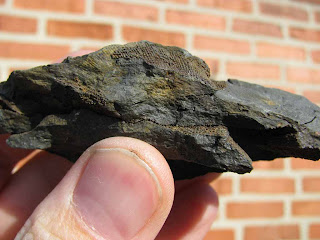 I imagine the colony originally looked something like an open book with pages that stuck up and fanned out once the spine was laid flat. Of course it could just be multiple flat colonies that were stacked on top of each other during a storm event. It's too bad I could not find more pieces to the puzzle so that I could see if they interconnected.
Posted by Dave at 12:01 AM