Stromatoporids are a group of sponges that happen to have a similar name to a fossil created by blue-green algae called a Stromatolite. The difference being that Sponges have star shaped pieces in their skeletons called spicules and blue-green algae have no skeleton whatsoever. When I first saw these fossils in the field as a child, I thought they were fossil tree stumps until the gentle correction by a more experienced rock club member told me otherwise. It wasn't until two years ago that I even knew the difference between Stromatolites and Stromatoporids. Thanks to my friend Tim (who runs the blog Swimming the Ordovician Seas) pointing out the key differences to me, I now know what to look for.

Here is a Stromatoporid that was found in the Keyser formation. They Keyser formation is upper Silurian to lower Devonian in age (Pridoli to Lochkovian stage). Notice that the cross section looks similar to Stromatolites or possibly a tree trunk. 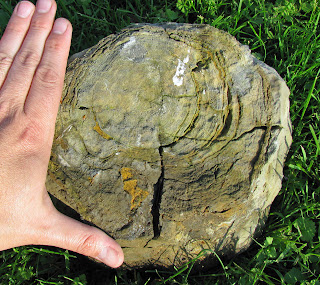 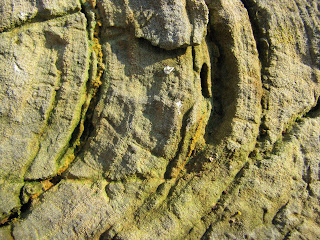 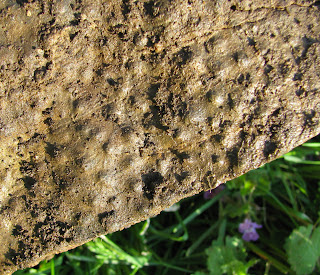 The last picture above shows a bumpy surface which is a great indicator that the specimen is a Sponge. Here is another, smaller specimen that shows similar features and is from the same quarry. 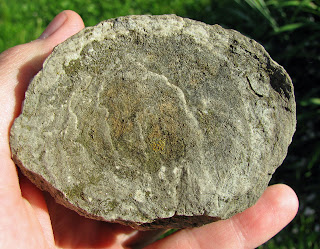 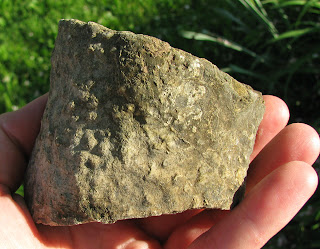 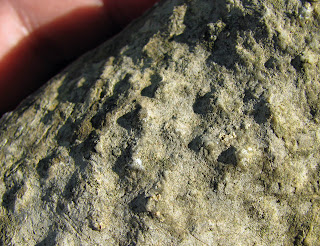 Sponges are often thought of as delicate creatures and they rarely leave fossils. This is true except that the Stromatoporids were important reef builders and constituents of the early Paleozoic due to the fact that they cement their skeletons together with Calcite or Aragonite which is very strong and preserves well. At the site I found the above specimens, there is a 24" thick layer that is composed primarily off those fossils.

I was reminded of these important reef community fossils while sorting and cleaning fossils from the Centerfield limestone (Devonian, Givetian) of New York. I found a number of specimens that showed similar bumpy features on the surface but they didn't form thick, dense colonies like those above, rather they occur as thin, plate like structures with a very wrinkled bottom: 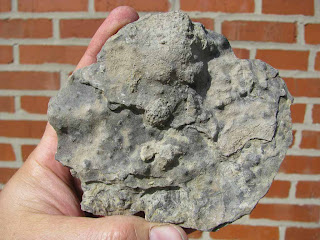 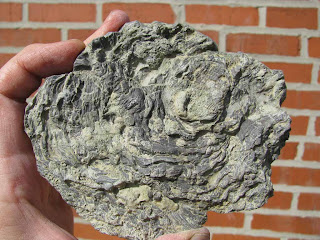 A closeup of the surface structure shows us the bumps: 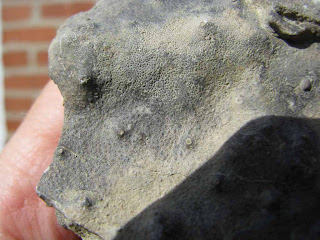 I haven't yet ID'ed the genus or species yet but I found a number of specimens and they all look similar. In fact there are some tabulate corals from the same area that have a similar wrinkled bottom surface and I wonder if they colonized a dead Stromatoporid?

Here is another Stromatoporid from the Devonian but this originates from the Jeffersonville formation near Louisville, KY. The last photo shows some small Sterolasma rugose corals that apparently lived within the Stromatoporid structure: 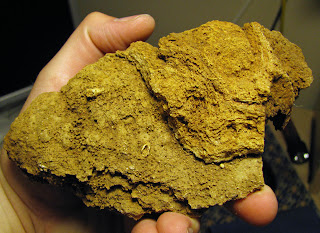 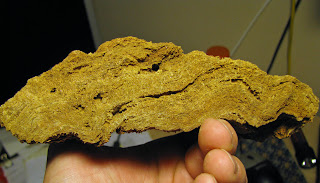 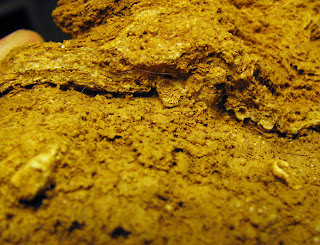 I recently found out, through reading Wikipedia of all places, that Stromatoporids are not extinct and the living members of this order are recognized by the zoological society as sclerosponges, but are identical to what the paleontological community has identified as Stromatoporoids. It seems they have been marginalized to habitats that modern corals won't colonize. This is similar to many of the "living fossils" found around the world to this day. Who knows, as many of our current coral reefs are dying out due to warmer waters or pollution, perhaps the sclerosponges will step in and become important reef builders once more.
Posted by Dave at 12:01 AM