It's neat sometimes to go through your boxes of findings and remember how and where you found each item. Many of you probably got started collecting fossils as a kid when you picked up a piece of rock with a shell or coral preserved within. My first fossil was found at a rock show in California that my Mom took me to. I was five or six years old at the time and my older sister had visited it during a school trip. My sister wanted to go back and Mom thought it would be a nice family trip.

This was my first rock show and I don't have too many memories of the experience but some few did impress upon my formative brain and I still recall to this day. I wandered around the large hall looking at the various rocks, minerals and fossils that were on display. I recall a bucket of "pick your own" geodes in one corner next to a rock saw along with plenty of lapidary rough and slabs. I only had a few meager dollars with me and my purchases were a piece of Cinnabar, a small 1" x 1/2" slab of Turritella agate with a whole snail in cross section and four Brachiopod shells. I still have all of them in my collection somewhere, but I came across the four original Brachiopod shells while sorting through my Devonian boxes: 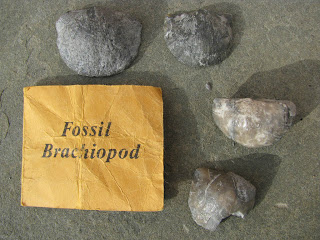 The fossils are Strophodonta from the Devonian (Givetian) aged rocks of the Silica shale in Sylvania, Ohio. You can see the (now worn) card that came with them is still intact and a great memory to have as well. These are very common fossils in the formation and are still found today at shows in give away bags and inexpensive fossil bins. Here you can see the inside of the card that came with the fossils: 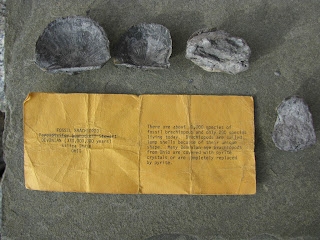 Notice that the card was originally meant for some Paraspirifer fossils. The seller crossed the name out but never put the Strophodonta name in it's place. It's an innocent thing that any of us do when giving a fossil to a child. You can't know if they will care what the fossil is once it leaves your booth or they might loose the label later anyway. It wasn't until many years later, as I was looking through fossil web sites and books, that I recognized the fossils for what they were. I came full circle in 2007 when I took a trip through Ohio and down to Cincinnati. I made a stop in Sylvania and had the opportunity to collect from the Silica shale dumps at a quarry. I picked up a lot of Strophodonta shells then along with many other species, but the first four I got as a child remain one of my favorite fossils.
Posted by Dave at 12:01 AM