Brachiopods are probably the most commonly found shell fossil in Paleozoic rocks and often my favorite fossils. When reading descriptions of the different genera and species I find it is easy to get confused by some of the terms used to describe how the shells look. This is what I have learned and refer to when discussing Brachiopods. 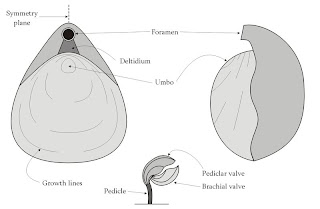 The shells of Brachiopods are referred to as valves and are named the brachial and pediclar (or pedicle). Where the two valves meet is called the hinge line and the part that is opened to allow feeding is called the margin. The pediclar valve has an opening at the tip of it, called the foramen, which allows a muscle called the pedicle to extend from the opening and secure itself within in the mud or to a hard surface to help keep the shell upright in the currents. Another important part of the shell is called the deltidium or interarea and is usually found on the pediclar valve. This is the triangular shaped area that is below the foramen and extends down to the hinge line. The size and shape will vary between different genera and can be very helpful in differentiating between similar specimens.

I'll discuss some of the internal anatomy of Brachiopods in a future post.
Posted by Dave at 12:01 AM

Email ThisBlogThis!Share to TwitterShare to FacebookShare to Pinterest
Labels: Brachiopod