I don't have many micro fossils for the simple reason that they are rather hard to spot in the field. Unless you know what to look for and are willing to use a magnifier as your primary means of searching, you aren't going to stumble across them. There are exceptions and below is one of them. 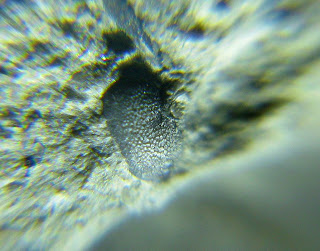 This is an Ostracod from the Murder Creek Bed of the Wanakah Shale Member of the Ludlowville formation (Devonian, Givetian) of New York. It's about 1mm long and the photo above was taken by focusing my camera through the lens of my 16x hand loupe. I had read about them being found in an old railroad cut near East Bethany, New York at this site: Ostracods of the Wanakah Shale Based on the pictures at that site I think the above fossil is of a Ponderodictya punctulifera (Hall)

Ostracods are Crustaceans and related to shrimp. They have existed since the Cambrian and are still found among the plankton in today's oceans. Their bodies are oval or seed shaped (their nickname is "seed shrimp") and composed of two shells that surround the rest of the body. Usually what we find are the exterior shells but there have been instances of the smaller appendages being preserved and confirming the link to modern species. Ostracods are so ubiquitous in the fossil record that they can be used to determine the environment of the time and are often considered index fossils (fossils which are used to the determine age of a rock formation).

Besides the desire to stop at this site to better understand the stratigraphy of the Hamilton Group in New York (a later post topic), I wanted to pick some samples up for my fellow blogger Mike at Louisville Fossils since he has an avid interest in micro fossils. He also has a microscope available to him so that makes it a bit easier to study these tiny fossils.

Looking over some of the matrix pieces I brought back with me I can see some other Ostracod genera present. Maybe when I have the patience I'll try the loupe as lens thing again.
Posted by Dave at 12:01 AM