This is a piece of Quartzite with Skolithos trace fossils present. Skolithos is the name given to the thin vertical tubes that you can see running from the bottom to the top of the rock. This type of trace fossil is not uncommon in the geologic record and is known to occur in sediments from the Cambrian up to the present day. 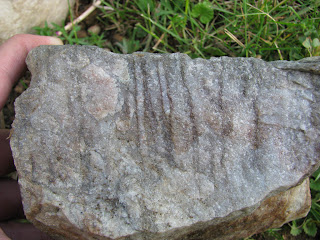 This particular piece of rock comes from the Montalto Member of the Harpers Formation of York county in Pennsylvania. It's interesting due to the fact that an ancient surface of the sea floor has been preserved and you can see the tops of the tubes. They look like small ovals carved into the rock and probably represent a sediment mound that was created as the animal moved in and out of the tube to feed. Nobody knows exactly what kind of animal created these traces but the going theory is some kind of worm. 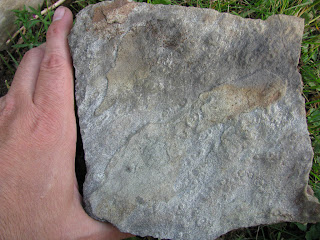 Some of you may ponder the notion that I found these fossils in a Quartzite which is a metamorphic rock formed from Sandstone that was transformed under immense pressure and temperatures. In fact the formation this rock came from has been dated to the early Cambrian (542 mya to 520 mya). It is thought to represent an active beach environment with wave action much like the intertidal areas on today's beach.

Often you won't find fossils in metamorphic rocks because the processes involved will up destroy them. Sometimes fossils will be found, however, in rocks that have undergone the process but were not involved in a lot of movement. For example, take a couple of individual cake layers and put a design on one of them. Then stack the other cake on top of the one with the design and press down, thus representing the pressure the rocks undergo. If you don't move your hand around much then the design will be intact. If, however, you push down and then slide the two layers across one another and then fold them over you will destroy the design. In the case of this example the rock was transformed by pressure and heat forcing the quartz grains closer together and recrystallizing some but without pushing the grains around, thus preserving the Skolithos tubes.

Here is another example of Skolithos tubes from the Antietam formation. The rock is a lighter color than that from the Montalto Member but was probably formed the same way and is a little younger in age. 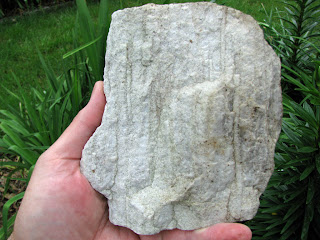