Lingula is a Brachiopod that has been found in the fossil record from the Cambrian all the way up to today's ocean floors. It's a very primitive genera and that is probably a reason for it's longevity. Many animals specialize in a particular niche within the ecosystem. This makes them vulnerable to extinction when the environment changes or a food source disappears. Lingula have survived every major extinction event througout history because they are not picky about where they live or what they eat.

Lingula gets it's name from the similarity of it's shell to that of a small tounge (Lingulata, from the Latin word for "tongue"). They are inarticulate brachiopods which means their shells do not open and close along a hinge line. Rather they are pushed apart by a muscle within the shell thus allowing them to feed.

Here is a picture of a modern day Lingula from the Colorado State University website. 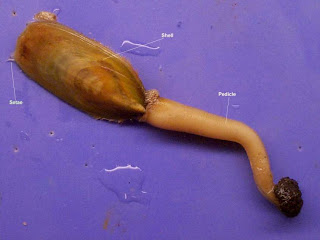 For comparison, here is a Lingula from the Mahantango formation. 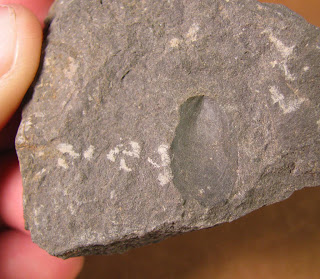