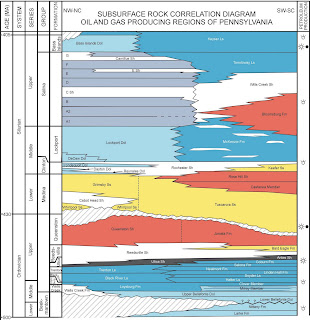 Note that the base of the Bloomsburg formation and top of the Mifflintown formation interfinger with each other as shown by the zigzag line separating them. The approximate age for the rocks exposed in the quarry is middle Silurian (Wenlock epoch, Homerian stage).

But I digress, I went to the quarry as I'd read that fossils could be found there and I don't have many Silurian aged fossils from PA. I parked my car along the side of the road and hiked back to the quarry which can be seen from Highway 220. This was my view as I approached (as always, click the picture to view it in more detail): 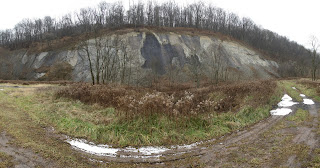 You can see the rock layers are set at a high angle so you get a view of a large surface area. Note the large ripple marks in the darker colored rocks. Those are mega ripples and are indicative of a current as opposed to direct wave action.

As I got closer to the rock face I started to search the talus piles for fossils. I was expecting body fossils of brachiopods, gastropods etc. but I wasn't finding too much. Then I took a closer look at the rocks themselves and realized that there were hundreds of Ostracods preserved within them. Here is a typical chunk of rock. 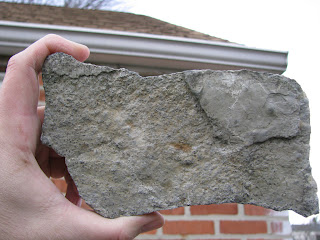 When viewed closely you see all the tiny Ostracods. 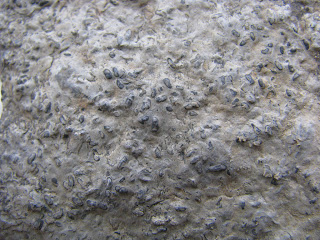 It's a limestone but a type called packstone because it is composed almost entirely of shells. Here is aAnother piece of rock with some black chunks that might be Brachiopod shell pieces. 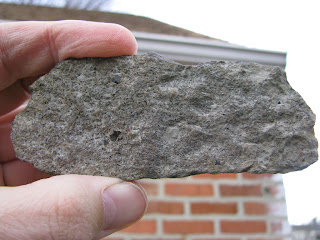 A third piece that I had broken off a larger chunk of rock. the surface has the same weathered appearance as others I found. 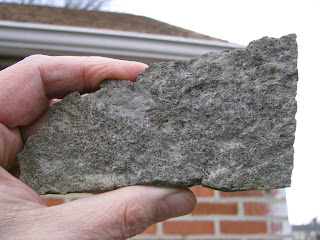 I put it under my Zorb camera and magnified it 20x to give me the picture below. 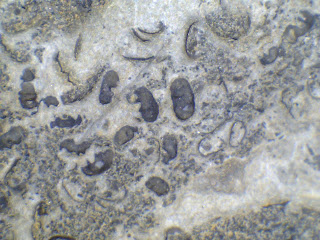 This is the back side of the rock which, on a whim, I placed under the Zorb as well. 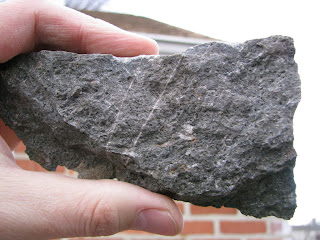 I was amazed to find even more Ostracods and they had better detail than those on the surface in some cases. 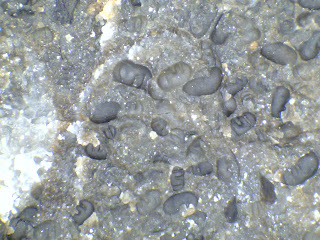 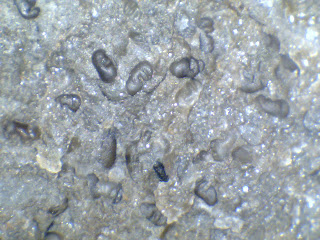 After reading up some more on the quarry I realized that the limestone was coming from the layer with the mega ripples. It seems that the Ostracods proliferated in the warm shallow seas and coated the sea floor with their shells. The currents organized them into the ripples as it moved over the surface. At times the sediment influx would increase in the area and a muddier shale was lain down which does not contain many fossils at all. This would cycle back and forth and can be seen in the layers within the quarry. After looking up the Mifflintown formation and McKenzie formation I determined that the majority of the Ostracods that I can see and ID are Kloedenella (the ones that look like the a puffy letter E).  There are other species present but I don't have the capabilities to truly study and ID them all.
Posted by Dave at 12:01 AM