I don't have many plant fossils from the Mesozoic era so I was pleased when I received a specimen of Zamites feneonis in a recent trade. Zamites was a genera of Cycad that lived during the upper Jurassic period (Kimmeridgian stage) near the coast of the Tethys ocean in what is now alpine France (the Jura mountains) near Geneva. 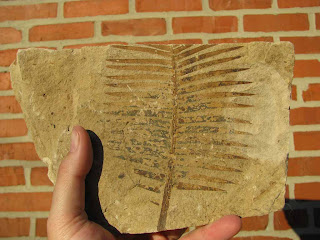 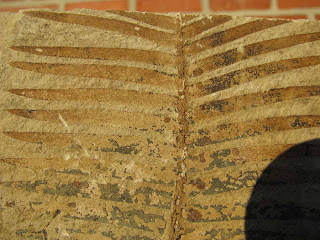 This fossil came from a site near the "Orbagnoux deposit" which is a well known and studied occurrence of Kerogen (an early stage in the formation of Hydrocarbons). Kerogen forms from the organic remains that are preserved in rocks. Depending on the amount present and the temperature and pressure it's effected by, it can form gas or crude oil. But usually it just forms bitumen which is often found as a black, oily smelling coating within cracks and along joints within rocks.

If you want to see some other pics of Zamites and learn more about the deposit, click here. It will take you to a French website that you will need a translation program like Babelfish to read.

Thanks to my friend Christian for sending me this specimen.
Posted by Dave at 12:01 AM