Today I have some odd trace fossils to show you. They are called Conostichus and come from the Pennsylvanian rocks of Texas. Most often found as conical shaped masses of sediment Conostichus are thought to represent the infilling of a burrow of some sort. 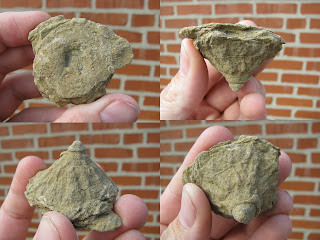 These were some odd fossils and I know very little about them and what they were. I posted pictures of these oddball fossils to the Fossil Forum to see if anyone could help me out. I got a lot of good responses especially from my friend Barry (Indy is his forum name) who pointed out that:

Conostichus (a fossil with a confusing history) was formerly thought to be a jellyfish resting trace. It is now regarded as a burrow infilling or feeding structure of an unidentified organism. These fossils were first described by Lesquereux in 1876 as a marine algae and then by later authors
as roots, stems, sponges or worms. C.C. Branson wrote a number of articles circa 1956/1962 in which he discusses numerous separate species. In a 1959 article he states "It is possible to state at this time that the genus Conostichus has but one species, C. ornatus; that some of the marine specimens may be medusoids; that some of the types are probably marine worms. Close examination of specimens in place in the rock and of the associated biota is necessary to a real understanding of these four similar types of fossil." In later articles he describes a number of new species. Joeckel, 2008 states "A trace-fossil hypothesis for the origin of the structures remains plausible...possible feeding structures---albeit problematic".

Barry is a smart guy and has his own website filled with good reading about his local rocks in the Missouri area at Paleontology and Geology of Missouri.

Here is another specimen of Conostichus that shows a slightly different shape and structure. 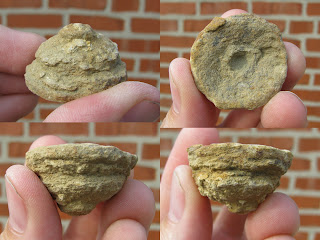 I don't have much locality info to go on with this specimen. All I could find with the label was "Pennsylvanian" and "Texas". I think it might be from the Finis Shale but I can't be sure.
Posted by Dave at 12:01 AM