North of Bedford, PA is the small town of Cessna and nearby are some old gravel pits that were once excavated for Iron Ore in the 1800's. The limestones of this region are part of the Clinton Group and contain a very low percentage of Iron that formed as a precipitate in the form of oolites. As a result these deposits were mined for the Iron content but only at surface level as there the limestone had dissolved away enough to concentrate the Iron more.

A number of years ago my Father and I visited one of these old pits on a fossil expedition. The limestones have profuse amounts of fossils, some of which are replaced entirely by Hematite (an oxide mineral of iron). We were following the directions given us in the book "Fossil Collecting in Pennsylvania" and I don't recall finding the actual pit but I did find some chunks of rock that were eroding out of a shallow road cut in the area.

A chunk of rock with some Bryozoan or Coral fossils: 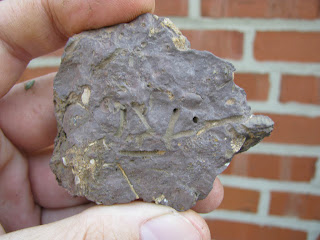 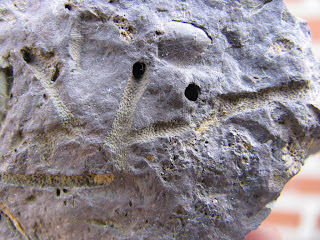 Side view of a rock with a Coral/Bryozoan in cross section: 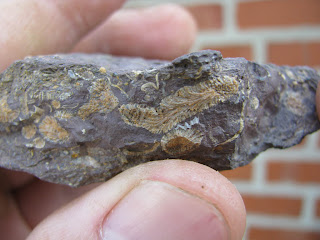 A large Cornulites (?) tube and a Trilobite pygidium: 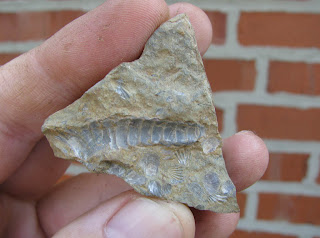 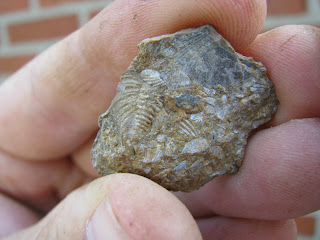 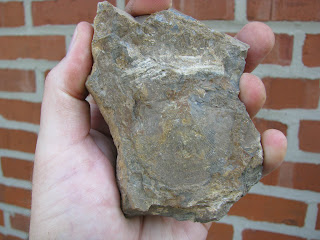 The book said that the rock layers were likely from the Rose Hill formation which is one of the few fossiliferous Silurian aged formations in Pennsylvania. The Rose hill is early Silurian and I think falls into the Llandovery series (443-428 mya).

While I didn't find a whole lot of specimens to bring home, the above few have lasted in my collection. I think I will take a trip out there this winter and try to locate the site again. Maybe I'll have better luck this time!
Posted by Dave at 12:01 AM