From the famous Miocene deposits of Calvert Cliffs, MD come these large shells of a species of Geoduck (pronounced Gooey-duck... I don't make these things up people). The name is a bastardization of a native american name which meant "dig deep" as the modern species lives 3-4 feet deep in the muds of intertidal mud flats. 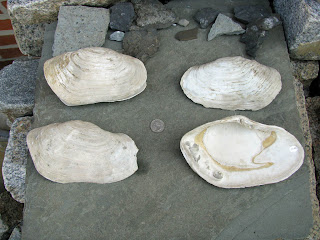 One of the odder aspects of it's anatomy is that it's shells do not meet up all the way around like most pelecypod species. 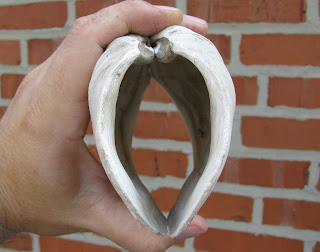 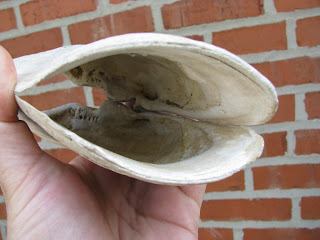 This is because the animal lives buried very deep in the mud and so does not need any defenses like a sealed shell to protect itself. This is what the modern animal looks like: 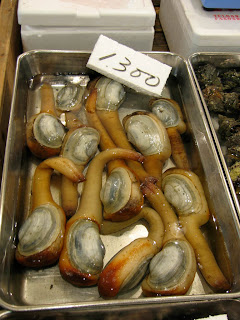 As you can see the soft body of the calm fills and expands beyond the confines of it's shell. The long fleshy extension out of the top of the shell is the siphon which is what the animal uses to suck in and expel water in it's search for food. In North America, the modern species Panopea generosa is now confined to the coastal regions of the Pacific from Oregon up into Canada, around the Aleutians and down along the northeast coast of Asia. They are commercially farmed and harvested in the Puget Sound area of Washington State and are considered a delicacy in Asia.

The fossil shells that I've collected are likely Panopea americana although there are two other species described from the cliff deposits: P. whitfieldi and P. goldfussii. These same shells are found in Miocene deposits in Florida

One of the valves that I've collected has an interesting growth feature along one edge. 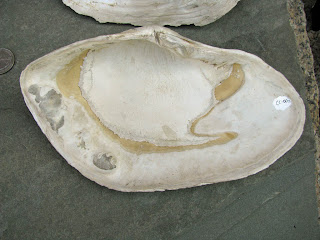 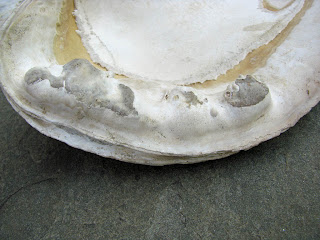 These are called "blister pearls" is an area of extra shell growth, likely over some irritant, and is similar in nature to an actual pearl. Due to the large size of the shell it can be difficult to collect these intact from the cliffs. The best way is to find a block that has fallen from the cliff and search it for the shells.

They also find a fossil species of Geoduck in the Pliocene of Florida: Panopea floridana. Below is one such specimen that still has the sediment (and associated shells) intact within the the shells. 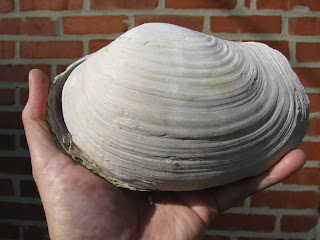 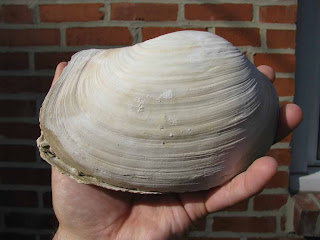 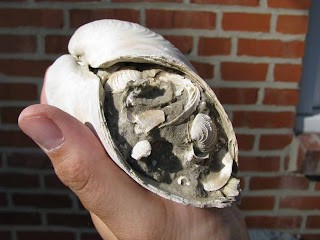