Recently a friend of mine on the Fossil Forum site asked me what the difference was between Atrypa and Pseudoatrypa. He has been looking for a Pseduoatrypa from the Arkona/Widder formations and wanted to be sure that he was able to tell it apart from Atrypa. The way I tell the difference between the two genera is the shape of the shell. Pseudoatrypa has a much deeper, domed brachial valve and flatter pedicle valve than Atrypa. Also Atrypa is more round shaped while Pseudoatrypa is more box shaped when viewed from the top down. Here are some pics of a side by side comparison of samples from the similar aged Silica Shale of Sylvania, Ohio. 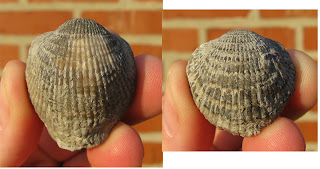 This is a group shot for scaling purposes with the two above shells side by side in the top row. I also included a sample of each genera from my local upper Silurian/ lower Devonian Keyser formation for comparison in the bottom row. I think they started small and got larger as the Devonian wore on. The monster on the far left is from the middle Devonian of Iowa and is called Desquamatia (Independatrypa) and is included to show you just how big some of these genera became. The Canadian quarter used to show scale is equivalent in size to the American quarter or the one Euro coin. 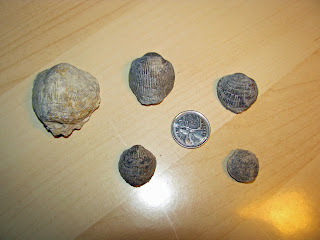