Cricket from the Green River formation

A rare find for me from the Parachute Creek member of the Green River formation is the cricket fossil below.  Crickets belong to the family Gryllidae and generally have long bodies with round heads and six pairs of legs, a pair of which are modified to be longer than the others and are used for jumping. It's those longer legs that lead me to believe the specimen below is a cricket.  I do not know enough about crickets to be able to narrow the ID down to the genera or species, especially as I don't know what species have been described from the Green River formation. 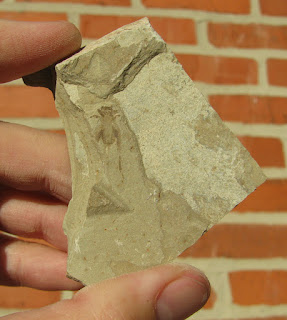 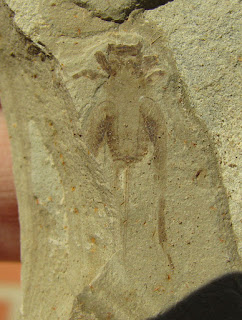 I collected this fossil near the FAA radar dome in Garfield County, Colorado near Douglass Pass. The Parachute Creek member of the Green River formation is Eocene in age, Lutetian stage (about 46 mya)
Posted by Dave at 12:01 AM