This next fossil is one that always gives me trouble when naming it. Some refer to it as Kozlowskiellina and some as Delthyris. Both are very similar shells and appear to be valid names. The former seems to be confined to the Silurian and lower Devonian while the latter ranges from the Silurian up into the lower Mississippian (based on what I read on the Fossilworks.org website). The best reference found that lists the fauna of the Kalkberg formation (L.V. Rickard and D.H. Zenger. 1964. Stratigraphy and Paleontology of the Richfield Springs and Cooperstown Quadrangles, New York. Bulletin of the New York State Museum and Science Service 396:101) uses Kozlowskiellina perlamellosa and that is what I will settle on as the name for this brachiopod fossil.

Kozlowskiellina perlamellosa is a half moon shaped shell with a straight hingeline. Both valves are covex and roughly equal in size with the pedicle valve being slightly larger. The pedicle valve recurves back and mostly covers a small delthyrium. The surface of the valves have strong ribbing which in turn has prominent growth lines. 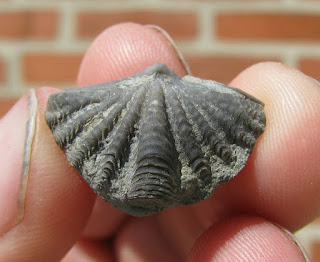 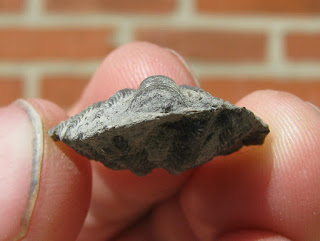 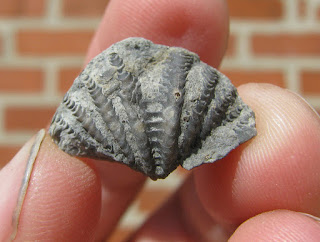 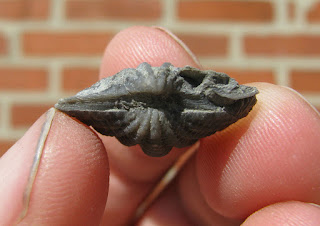 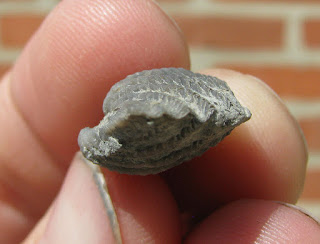 This fossil was found in a road cut near Shoharie, NY in the Kalkberg formation (Lower Devonian, Lockhovian to Pragian stage).
Posted by Dave at 12:01 AM