This past April I took a trip through Virginia and West Virginia exploring some sites that were listed in the book "Fossil Collecting in the Mid-Atlantic States" by Jasper Burns. This is an old shale pit that exposed some Marcellus formation rocks in Maryland. 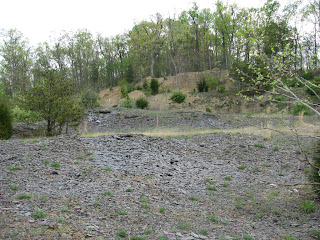 The Marcellus shale is not know for it's fossils as it was a deep water black shale formed in anoxic conditions. It's more commonly known for being the rock formation that all the natural gas drillers in the NE are trying to "frack". However this site does happen to have some notable fossils of, surprisingly, Crinoids. Intact and articulated Crinoids. I spent about a hour searching the site and fossils can be found but they are very isolated and difficult to locate.

An isolated arm with pinnules. 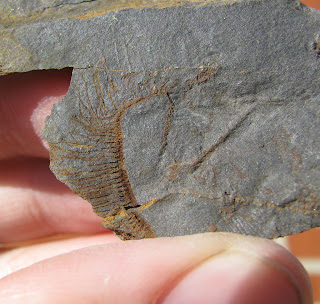 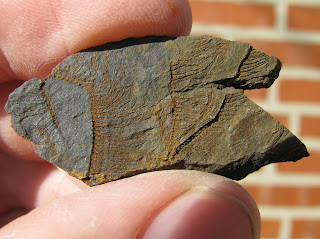 I think there may be a calyx hidden where this three arms disappear into the rock. 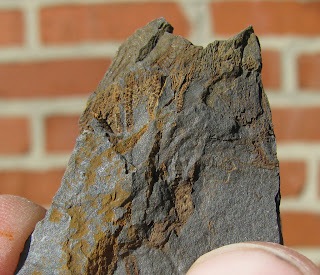 This piece definitely has a calyx (on the right side of the slab) but the preservation is not good enough for an ID. 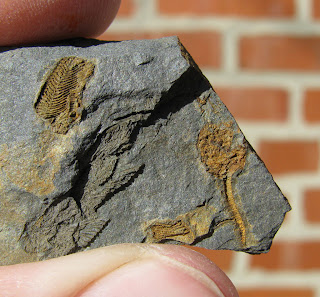 The only other fossil I found besides Crinoids were these occasional productid brachiopods. 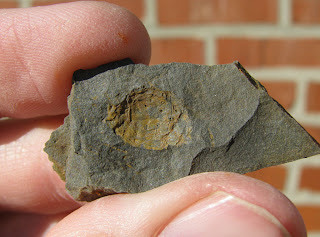 I came across this specimen at a fossil show back in March that I think is from the same locality. I think it's an Arthroacantha similar to this specimen from the Silica Shale in Ohio. It's a nice piece to compare with what I found at the site myself and to tempt me to go back again. 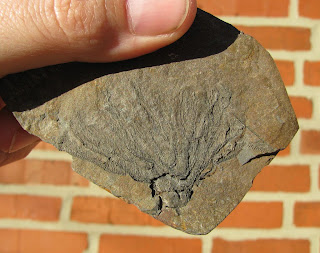 I would be interested in learning more about this paleoecology of this site and how articulate crinoids came to be preserved here. Did they colonize the substrate when oxygen levels were higher only to succumb when the dropped again? Were they "blown" in by storm currents? Were they attached to floating debris but dropped off? Whatever the case it's a rare thing to find any parts of a crinoid articualted so I will be back to this site again in the future.

I came across this specimen at a fossil show back in March that I think is from the same locality. It's a nice piece to compare with what I found.

The above specimen came from an old quarry near Big Spring in Washington county, Maryland. The cut is listed as site #21 in the book "Fossil Collecting in the Mid-Atlantic States" by Jasper Burns. The Marcellus formation is part of the Givetian stage of the middle Devonian.
Posted by Dave at 12:01 AM