I wrote the previous post several months after I had visited the site near Lusters Gate northeast of Blacksburg, VA. Just a week ago I was breaking apart some of the shale that I had brought back with me and found a few more fossils.

The first fossil I found was this snail. It's pretty tiny and not well preserved so I don't think I will be able to positively ID it. 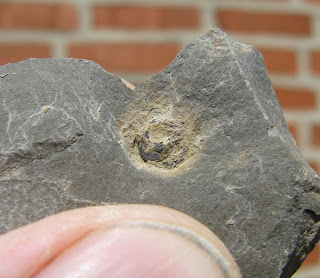 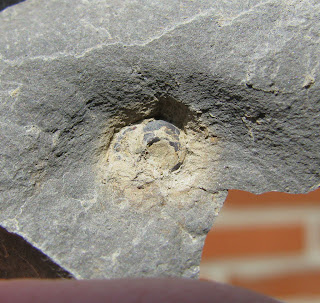 The next fossil is a internal mold of a brachiopod. Again, the fossil is so small and in poor condition. 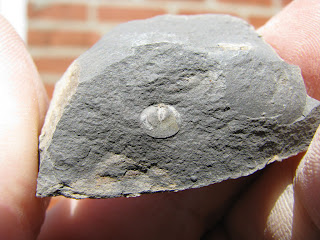 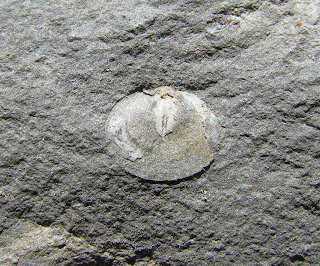 This is a cephalon from a trilobite (which is what I wanted to find when I went to the site in the first place). 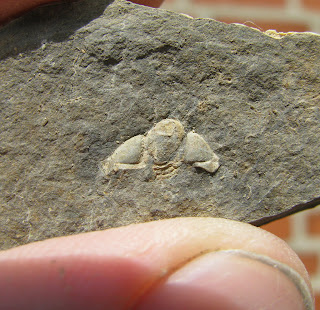 The trilobite is likely a Ampyxina powelli (Raymond, 1920) as ID'd by the helpful members of the Fossil Forum.

The above specimens came from a roadcut along Route 785 near Lusters Gate, Montgomery county, Virginia. The cut is listed as site #2 in the book "Fossil Collecting in the Mid-Atlantic States" by Jasper Burns. The Liberty Hall formation is dated to the middle Ordovician Mohawkian stage and is roughly equivalent to the Shippensburg and Chambersburg Limestones in PA. It is below the Lexington Limestone of Kentucky and is considered a part of the Black River-Trenton group in NY and Ontario.
Posted by Dave at 12:01 AM