Strophomena (?) brachiopod from the Verulam fm.

This next piece was a surprise to me as I was going through my boxes of findings from the Verulam formation. It looks like it's a single valve from a Strophomena filitexta brachiopod. If that proves to be the case then it's a rare find as they are not common in the Verulam formation. It can be distinguished from the similar Rafinesquina by the rectangular shape of the shell and the fact that it's not as convex.  Here is the shell as it is in the matrix with the right side still buried. 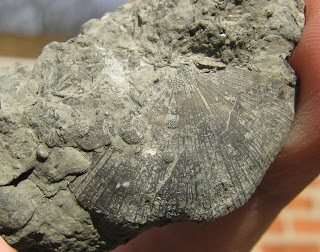 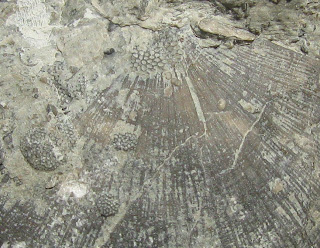 An even closer view reveals some Ostracods that are on the surface as well. 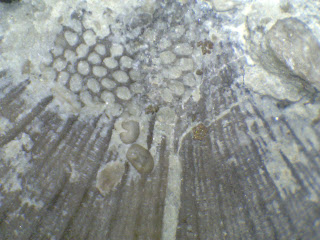 Unfortunately I don't have anything that can image the Ostracods any better. The above photo comes from my Zorb camera which has magnified the tiny crustacean shells almost 20 times normal size. The specimen was found in a quarry near Brechin, Ontario in the Verulam formation which is middle Ordovician (Katian/Mohawkian) in age.
Posted by Dave at 12:00 AM