The fossils I'm featuring today are from the Marble Hill Bed. This is a layer within the Ordovician (Richmondian) aged Whitewater formation and is found in a geographically small area near Bedford, KY. Within the unit is a very limited fauna that is dominated by Mollusks most of which are Paupospira bowdeni(Loxoplocus bowdeni). It has been interpreted as a shelf edge bar deposit.

Here are some of the fossils that can be found within the bed. Clockwise from left, Orthoceras nautiloid, Cyclonema gastropods, Paupospira gastropods and Cycloconcha Pelecypods. 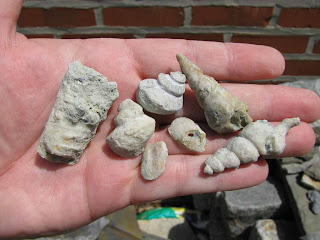 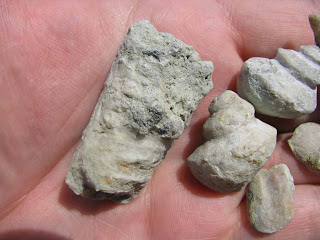 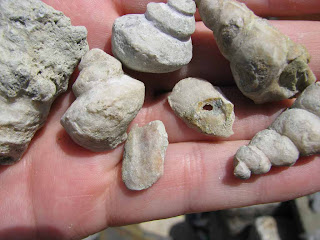 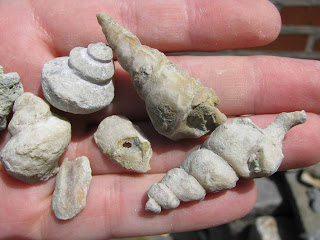 One of the interesting aspects about this bed that has been studied is that the shell material of the fossils has been recrystallized from the original Aragonite to the more stable Calcite. The recrystallization was very unusual because the lamellar microstructure of the shell structure has been preserved. This is different from how mollusks are generally preserved within other parts of the Ordovician formations which is by casts of the internal body space or by dissolution and redeposition of the shell by Calcite.

Thanks to Mike at Louisville Fossils and our mutual friend Herb for the fossils. Mike has write ups of Paupospira and Cycloconcha on his site.
Posted by Dave at 12:01 AM