This post is my 200th entry on this blog and, while that is not a particularly impressive nor typical anniversary, it is something of a milestone for me. To mark the occasion I've decided to post a detailed trip report that I've neglected for a few months.

It was a cool March spring morning when I arrived at the meet point in Odessa, Delaware. People from many different clubs had gathered to collect petrified wood for which the area was known. Once 9:00am arrived our group caravaned over to an old farm field which will soon have a new school built upon it. This was a last visit to the site for some but a first visit for me.

I rode over with some friends of mine to reduce the number of cars at the site. Upon our arrival we found an old corn field that was overgrown and, just beyond, a bulldozed area next to a huge mound of dirt that had been moved in preparation for the future construction. Where the land had been bulldozed and graded there was a brown clay layer exposed with a small area of white quartz sand and pebbles in one spot. All over the surface were rounded cobbles and pebbles of quartz and other rocks along with hay that had been laid down to try and prevent erosion. The wind had blown much of the hay off the ground surface which made searching for the wood easier. Here is a panoramic view of the site (click to make larger):

My friends and I were all new to the site so we headed off from where everyone else was moving towards in order to make our own finds. After about a half hour we had found nothing but a few slivers of petrified wood and some interesting cobbles between us.

As we started to move towards where the rest of the group was spread we started to find more and more wood and realized that we should have followed them in the first place. This did not limit the amount of wood we found in any way, however, as there was plenty on the surface. My friends and I quickly figured out where the richest concentration of wood was being found and focused our search there. It seemed like there was an oval shaped area on the site where you could find wood plentifully. Head outside that area and much less was found.
As one walked along the surface of the ground you would easily find small pieces of fossil wood (about one to two inches long by ¼ to 1 inch wide) that was light gray to brown in color. All showed excellent grain detail and you could see the layers of the wood from the side on the thicker pieces. All of the pieces were broken and generally rectangular, very rarely jagged, with some that displayed a degree of smoothness which was likely derived from weathering. No whole branches or log were found, it seemed the wood had broken apart before being buried. The petrified wood color varied with some displaying interesting patterns. 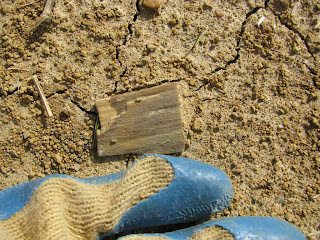 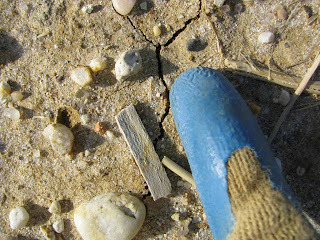 Lucky for us the bulldozers had made our collecting easier by removing the top soil from an area of the site. This exposed the clay layer where the wood was found. I found out that in the past collectors would wait for the fields to be plowed before they searched as that would turn up more wood. While most of the small pieces could be found on the surface, sometimes you would see just the tip of a piece poking out of the ground. When pulled up you often found a larger piece than what you saw on the surface. 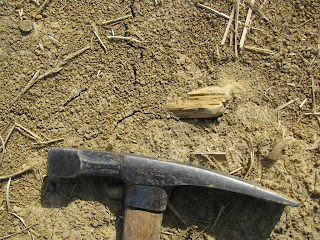 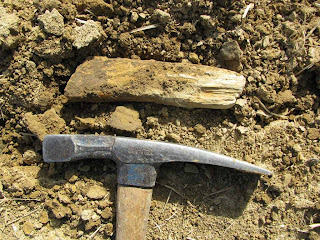 This is one of the larger pieces I found. 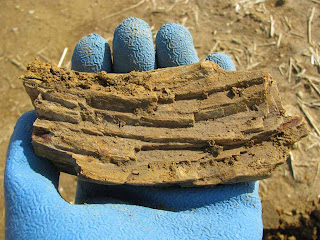 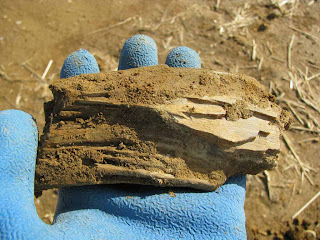 When fresh out of the ground you can see some cool colors. 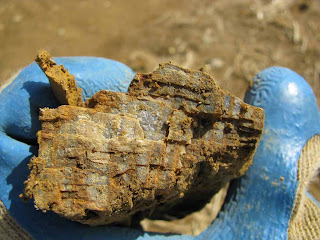 Some of my friends tried digging in the clay to find larger pieces and were occasionally successful. A few collectors had luck searching the large dirt pile, which had been derived from the top soil in the first place, for fossil wood as well.
Around noon the trip leaders told the group that they were headed over to the C&D canal to look for Cretaceous fossils. There was not a requirement that we go along and we learned that the canal site had much more limited parking. As my group of friends and I had been to the canal site before we decided to stay and look for more wood as this might be the last time we could before construction began.
There was an area that was still left fallow, from when it had been a corn field, and I wanted to see if I could find something “the old fashioned way” without the help of the bulldozer. 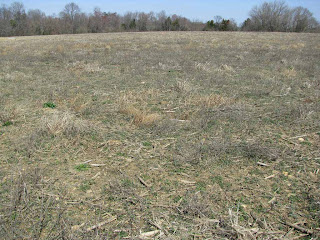 It was much harder to see the wood but it was still present in the fallow field. In fact I found my largest and most distinctive pieces in the field. I would walk slowly through the overgrown corn stalk stumps looking for a light tan colored wood grain pattern against the light gray broken stalk pieces. When I found something I would get on my knees and look over an area more closely, moving dead vegetation out of the way to improve my odds. I filled up my collecting bag about a third of the way with this method over the next two hours. By 2:30pm I had developed a sharp pain in my back between my shoulder blades that was made worse whenever I looked down. It was time to call it a day. The person I had driven over with earlier took me back to my car and I headed home with a collecting bag full of petrified wood.

A large piece with druzy quartz 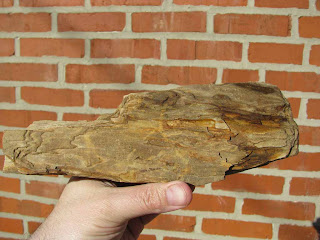 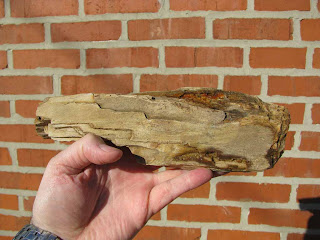 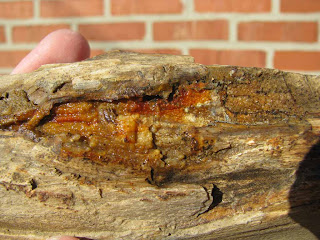 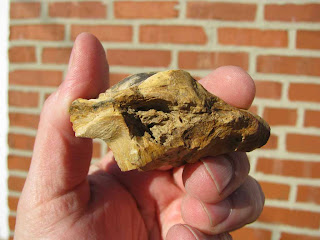 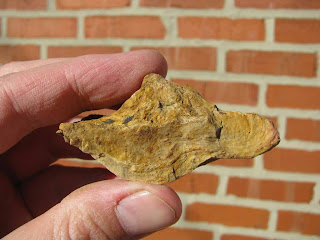 Since the trip I’ve been trying to find information regarding the fossil wood but there is not a whole lot out there. Most of the local clubs say that the wood is from ancient Cypress trees of the genus Cupressinoxylon. The opinions about the age of the wood differ though. Some say that it is Cretaceous in age, others say Miocene but everybody agrees that it eroded out from the original deposit and was reburied during the Pleistocene.

This piece has some interesting bumps. 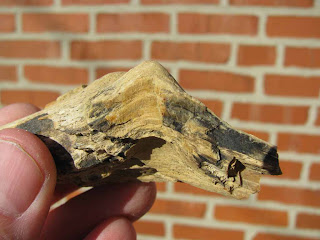 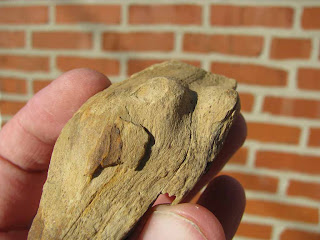 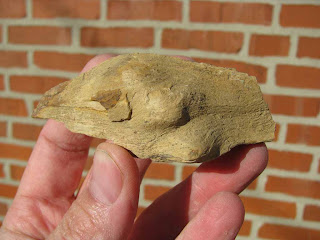 From what I could tell from my visit to the site, the sediments that the wood is found in are a brown clay which overlies a clean, white sandy mixture which in turn overlies a glauconitic sandy base. I did a little research and the local geology of the area is the Paleocene aged Rancocas formation with some areas of the Pleistocene aged Columbia formation. I read a report from the Delaware Geologic Survey on the Columbia formation and it stated that the sediments were derived from the erosion of a dissected upland area. As the upland erosion progressed it filled in the valleys between hills and so the Columbia formation had a variable thickness and deposition. It does describe the formation as having clay layers.

Still without any good answers, and not finding any studies or reports mentioning the fossilized wood, I called up the Delaware Geological Survey to see if they knew anything. I spoke with Pete McLaughlin, a staff paleontologist who usually deals with micro fossils, regarding the petrified wood found around the Odessa region. He had a lot of useful info but it basically boils down to: No one really knows. Pete mentioned that the petrified wood is found in an area between Odessa in the north and New Smyrna in the south and almost always in the Columbia formation. He said that we were likely collecting from the Columbia formation, which is Pleistocene in age. Based on my description of the site, Brown clay overlying white gravel/sand overlying greensand, he said it sounded like the site was at the boundary between the Calvert formation (Miocene) and Rancocas group (Cretaceous/Paleocene) with some Columbia formation (Pleistocene) on top of it all. He also remarked that when they were doing construction on Route 1 they found a large log of the petrified wood that was very close to the contact of the Rancocas group and Calvert formation (but still within the Columbia formation).
So according to Pete the brown clay was Columbia formation, the white sandy areas were remnants of the Miocene aged Calvert formation and the greensand areas were part of the Rancocas group (possibly Hornerstown formation). No actual studies have been performed on the wood or its deposition so there is no official word on the matter of its origin or age.

From what I have learned and observed I think that the wood originated in an Eocene to Pliocene aged formation, was eroded out and then redeposited during the Pleistocene as part of the Columbia formation clays. This would explain why some pieces are smoother than others and the fragmented nature of what is found. The transportation couldn’t have been very far because the fossil wood is not rounded as though it had been in a fast moving stream. It merely looks like it was exposed to water or wind abrasion for a short time and then reburied.

The good news is that despite the school being built, there will likely be more fossil wood to be collected since it occurs over a wide area in Delaware. My club or I just need to keep an eye out for construction excavations or ask a farmer politely to search his field after it’s been plowed.

A twisty piece of wood 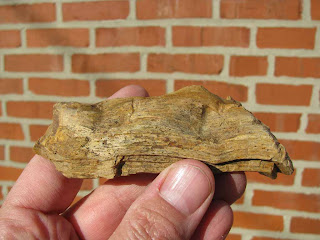 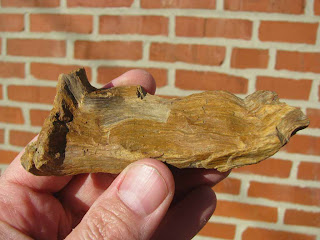