I pick up a lot of Heliophylum corals on my collecting trips to Arkona and always wondered if the internal structure of the animal was preserved. My friend Mike over at Louisville Fossils was kind enough to cut one of the corals I found and I later polished it to reveal the details.

This side was closer to the outside edge of the coral and thus you see vertical lines that represent the septa (body support structures) of the coral. 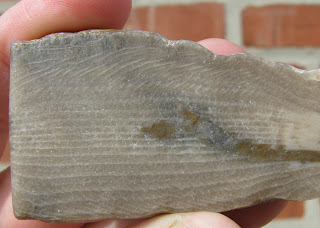 This side was closer to the center of the coral and slightly different details are present. Note the curved regions near the edges. I believe these represent older calice positions. The calice is the "cup" at the top of the coral that the animals body would have occupied. 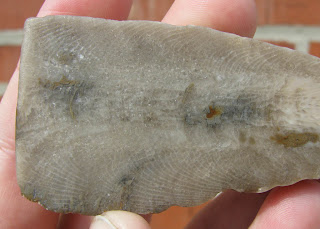 And a view of the cross section through the coral. 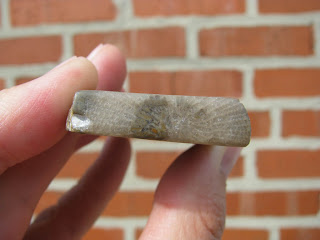 This specimen is from the Hungry Hollow member of the Widder formation, Middle Devonian (Givetian) in age and was collected near Arkona, Canada.
Posted by Dave at 12:01 AM