Not all Rugose corals were horn shaped, some formed colonial clusters much like Tabulate corals of the period. One such coral is Arachnophyllum pentagonum and the specimens below came from the Silurian (Ludlow) aged Louisville Limestone. They have had partial silica replacement of the original calcite skeleton.

This would have been the top surface that faced up into the water. The calices are preserved fairly well and intact so that you can see the growth pattern of the colony and some smaller details too. 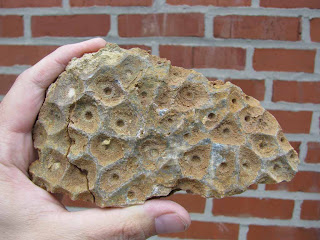 From the side you can see some of the remaining calcite that was not replaced. 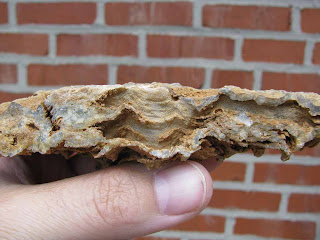 Note the fine layering that is present and seemingly random portions that have been replaced. 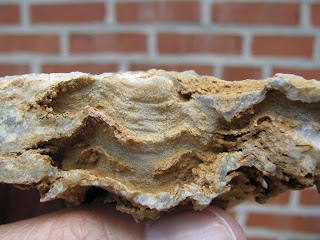 When you view the underside you can see that all the portions that were not replaced with Quartz have been dissolved away and leave a skeletal looking structure behind. 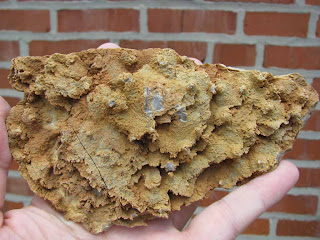 It is even more obvious at an angle. 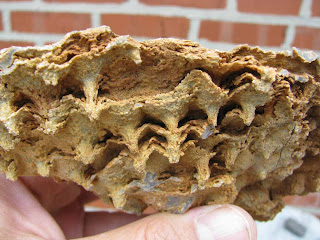 Another specimen that had less of it's upper surface preserved so that you can see some of the thin layering almost like an onion. 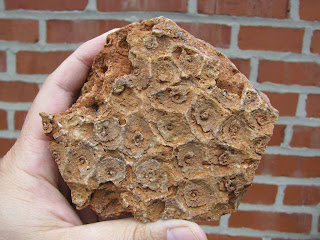 This pattern of partial quartz replacement is fairly typical for the preservation of corals from the Lousiville and overlying Jeffersonville limestones from what I can tell. I imagine that some of the Calcite was dissolved away  and later replaced with quartz. I'm not sure if it was a molecule by molecule process or if the Calcite was dissolved and the Quartz later came in and filled the empty spaces. Thanks to Kenny P. who let me pick from his pile of findings and keep the above specimens. They are larger and more intact than what I found in the field.

Mike over at Louisville Fossils has posted several pieces of this same species on his blog in the past. Click here, or here.
Posted by Dave at 12:01 AM