I'm going to start a series of posts that will focus on the fossils I have found in the Coburg and Whitby formation at the St. Mary's Cement Quarry in Bowmanville, Ontario.  I have been fortunate enough to get into the quarry three times in the last two years and I need to consolidate what I have collected and get everything labelled and named.  The quarry is private property and is actively worked my visits are as a member of a local club, Gem and Mineral Club of Scarborugh, during official club trips.

A view from inside the quarry 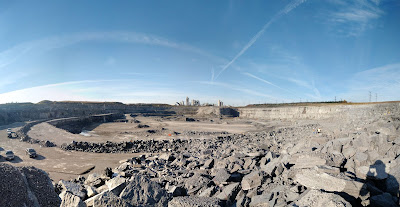 The quarry mines primarily the Coburg formation but the very top most layers are part of the Whitby formation while the very bottom most belong to the Verulam formation.  This exposes a nice chunk of upper Ordovician rock that is rich with fossils. The Coburg formation is primarily composed of  limestone beds with some thin layers of inter-bedded shale. The layers tend to vary from 1"-12" thick.  The Coburg formation has two members within it's layers, the Hillier and the Hallowell. The Hillier member comprises the majority of the Coburg with the Hallowell confined to the lower portion above the Verulam formation. The largest difference between the members is that the Hallowell has thicker limestone beds with a coarser grain.

I have found Trilobites, Crinoids, Cephalopods, Corals, Bryozoans, Graptolites, Ostracods, Pelecypods, and Brachiopods during my trips. I primarily hunt for fossils by looking at the surface of the rocks in a pile and see if I find anything of interest. If not I will try to split the rock and look some more. Sometimes you find the best fossils when you split.  Not many of the fossils weather loose and are easy to pick up. The limestone is a little bit harder and more erosion resistant and there are less fossil in the shaly layers.

A big pile of Coburg formation to search. 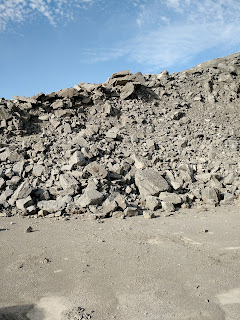 The Whitby formation is primarily represented by a thick section of black shales known as the Collingswood member. Typically black shales don't often have many fossils but the Collingswood surprises you with a decent amount of variety. I've found Trilobites, Cephalopods, Ostracods, Pelecypods, Gastropods, and Brachiopods in my searches. The primary method to find the fossils is splitting the thin bedded shales.

The Verulam formation is at the bottom of the quarry and is not extracted as much as the Coburg. It is more shaly and not as desirable for some construction purposes.  I've not spent much time collecting in the Verulam at Bowmanville as I tend to spend my time in the Coburg or Whitby formations. The fauna of the Verulam is similar to the overlying Coburg formation but with slightly different genera or species. It is easier to pick up loose specimens from the Verulam formation as the limestone seems to be a little softer and the shaly layers have more fossils.

As I mentioned before, this is an active quarry and we are sometimes limited as to where we can collect. As you can see from the picture below, the quarry machinery is quite large and would not notice if you were in their way. 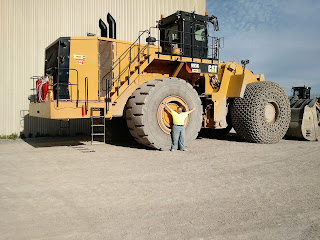 That's it for the introduction, The next post will start on the fossils that I have found from this quarry so far.

I used William Hessin's book "South Central Ontario Fossils", 2009, Self Published, as a source for the technical info in this post
Posted by Dave at 12:01 AM