Graptolites are mysterious lifeforms that lived primarily in the early Paleozoic era. They often formed colonial structures that floated in the water column. Melanostrophus sp. is an odd member of the group in that it does not form straight, segmented colonies. Instead they have curved or wavy structures. According to William Hessin's book "South Central Ontario Fossils", some paleontologists have considered Melanostrophus sp as a type of annelid worm. Whatever the case, this fossil is somewhat common in the upper layers of the Coburg formation and appears as a black carbonaceous coating on limestone surfaces. 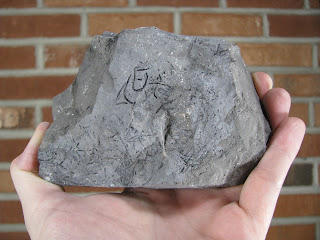 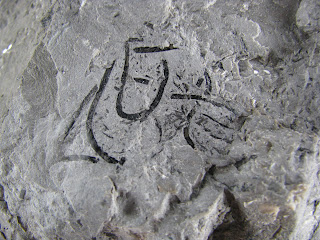 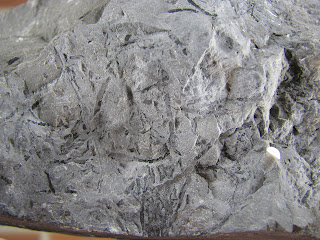 The Coburg formation is Ordovician in age (late Ordovician, Katian/Mohawkian stage).
This fossil was collected from the St. Mary's Limestone Quarry in Bowmanville, Ontario. I used William Hessin's book "South Central Ontario Fossils", 2009, Self Published, pg. 264 to help identify it.
Posted by Dave at 12:01 AM