This hand sized specimens looks to me to be a good example of Alveolites goldfussi.  It comes from a site near Louisville, KY that exposed Silurian and Devonian aged rocks from the Louisville Limestone (Silurian), Jeffersonville Limestone (Devonian), as well as other possible formations.  In my opinion this specimen is a good match for Alveolites goldfussi and looks similar to specimens I have found in the Hungry Hollow member of the Widder formation near Arkona, Canada.  It is a somewhat flat specimen with some relief and layering evident. The corralites are flat lying and resemble fish scales somewhat. A. goldfussi was an encrusting coral that would form flat shelf like colonies.
Top view of specimen 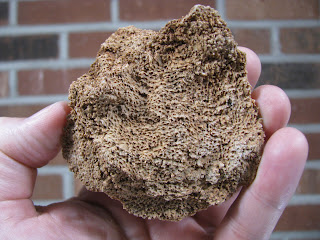 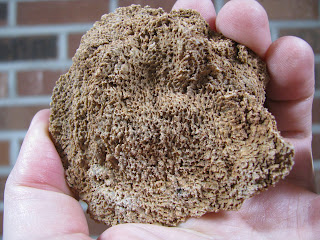 Closer view of the top surface 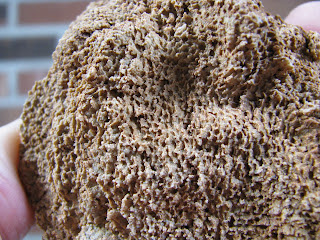 A view from the side where you can see the layering and corallite openings. 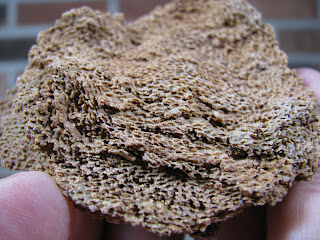 Underside view of the specimen. 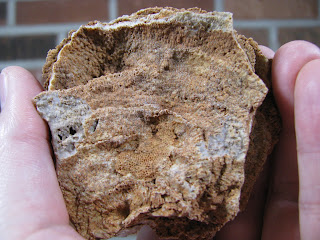 I believe this specimen comes from the Jeffersonville Limestone near Louisville, KY and is dated to the Devonian period (Eifelian).
References: Stumm, E. C. (1964). Silurian and Devonian corals of the falls of the Ohio. New York: Geological Society of America.
Posted by Dave at 4:04 PM