Among my finds from the Jeffersonville Limestone formation near Louisville, KY, is this solitary fragment of coral. The look of the exterior kind of reminds me of a pine cone, possibly due to the triangular shaped openings. I looked through the book by Erwin Charles Stumm; "Silurian and Devonian Corals of the Falls of the Ohio". and found a possible match on plate 68, fig. 14 to Aleveolites asperus.  I've only ever known Alveolites as a genus of flat, spreading corals that occasionally formed mounds. The key features are the corallite openings that are roughly triangular shaped and lie sideways. Sometimes the specimens look a little like fish scales too.  This specimen appears to have belonged to a branching coral rather than a spreading coral.
I am not familiar enough with the various species found within the Jeffersonville and Louisville limestones so say for sure that this specimen is Aleveolites asperus but, in my opinion, it looks a bit more like Cladopora roemeri as seen in these specimens from the Hungry Hollow member of the Widder formation, Arkona, Canada. Indeed, Stumm does list C. roemeri as a species he lumps into Alveolites winchellana with a number of other species from the genus Cladopora (pg. 73, Plate 66, fig. 1-8).  He argues that the 15 species he includes all represent partial specimens with slightly different growth habits that were described separately.  Unfortunately I only have one partial specimen so I can't say that either ID is more correct.
Below are three profile views of the sides of the specimen. Each picture the specimen is rotated roughly 30 degrees. 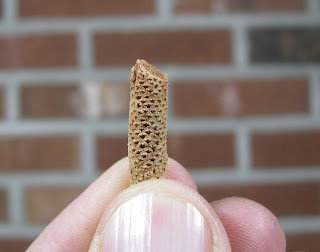 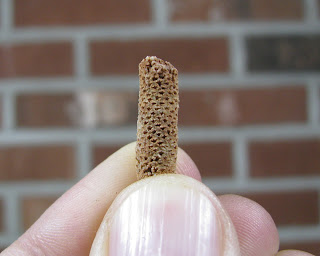 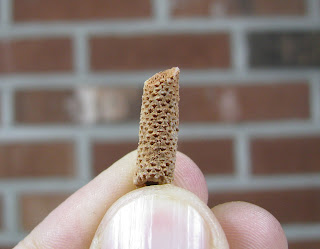 Cross sectional view of the specimen. 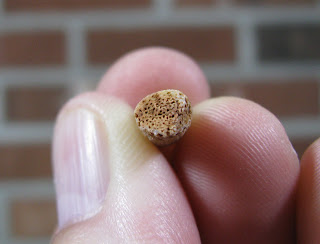 This specimen comes from the Jeffersonville Limestone near Louisville, KY and is dated to the Devonian period (Eifelian).
References: Stumm, E. C. (1964). Silurian and Devonian corals of the falls of the Ohio. New York: Geological Society of America.
Posted by Dave at 9:01 PM