Brachiopods and Worm tube on a Pelecypod from the Jeffersonville limestone

Multispecies specimens are always cool to collect. Sometimes it is just bedrock with a hash of many different species, other times it is a potential example of how life lived. The example below, from the Jeffersonville limestone, is in the latter category. It's a large unknown pelecypod shell that has a couple of brachiopods and a possible worm tube growing on the surface.
The specimen 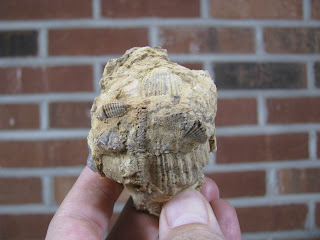 There is not enough of the pelecypod visible it ID it 100% but it could be related to Actinopteria sp. or Cornellites sp.  You can see at least three spirifirid type brachiopods that appear to be attached to the shell in life position. 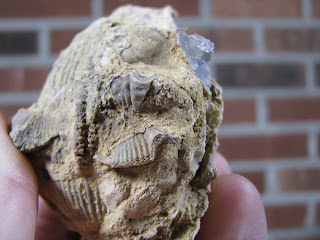 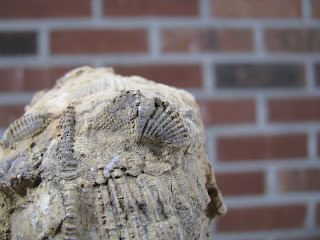 I believe that the brachiopods are juvenile Mediospirifer audaculus based on the shape of their shells and how they are positioned on the pelecypod. M. audaculus has a flat to slightly sloping interarea and this is how I would expect it would look when laying flat.
Also on this specimen is what appears to be a worm tube, or possibly a very large Tentaculites sp.  If it is a worm then it might be Cornulites sp. 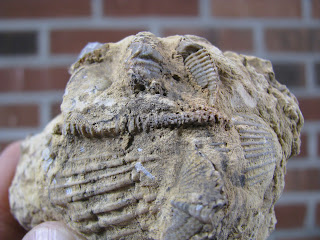