In northern New Jersey, the Mt. Laurel formation underlies the Navesink formation and is a source of many different mollusk fossils generally found as molds of the internal space of the shells. If you go father south into Delaware the Navesink and Mt. Laurel are considered undifferentiated and called simply the Mt. Laurel formation. The mold below is from the Mt. Laurel formation in Delaware and was found at the C&D canal dumps. It's a Turritella sp. shell and is somewhat intact considering most found are smaller or just a small piece. It was collected many years ago when the canal was last dredged and the spoils dumped on the sides of the canal. I purchased the fossil at a local show as finding them in the field is somewhat rare these days. One of the interesting features are the sinuous tubes that seem to occur in the mold. These would have been worm tubes that formed after the snail had died and the shell was laying on the sea floor. The sediment filled in around the tubes and thus they are preserved to be seen today. 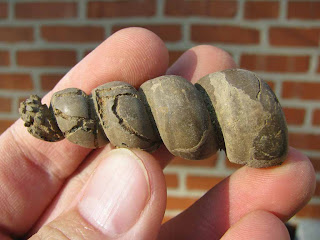 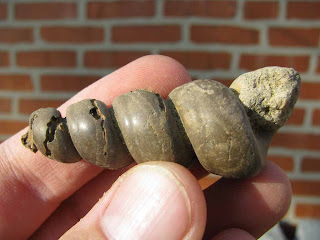 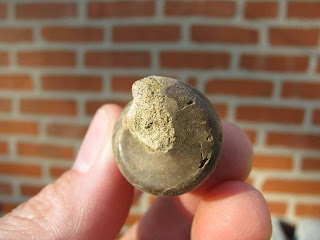 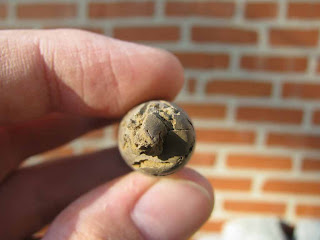 NJfossils.net has a great page that discusses the geology of the Navesink/Mt. Laurel formations as they are found in Monmouht county, NJ and references some of what I said above.
The Mt. Laurel formation is of late Cretaceous age (Maastrichtian stage).
Posted by Dave at 12:01 AM