Stropheodonta (Hall 1852) is a common genera from the Silurian into the Devonian but the shell of this specimen is distinct enough to make a species ID. The specimen shown below is possibly S. gibbera based on the book "Stratigraphy and Paleontology of the Hunton Group in the Arbuckle Mountain Region" 1958 Thomas Amsden and Arthur Boucot, Oklahoma Geological Survey, Bulletin 78 pgs:73-75. 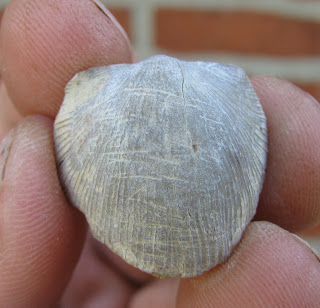 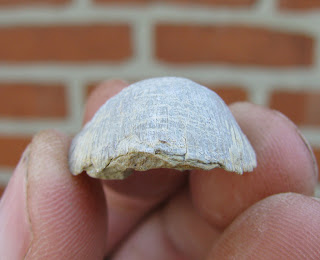 Brachial Valve (needs to be cleaned) 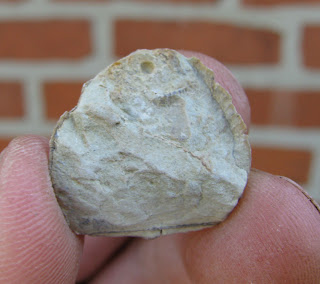 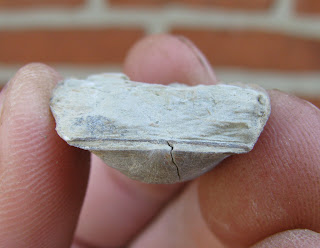 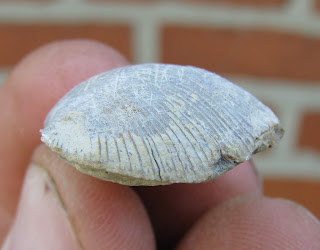 Note the highly convex nature of the Pedicle valve and how the sides seems to bend towards the tip like some kids do with the brims of their baseball caps. It's this growth feature that distinguishes the species. The species name come from the latin word "gibbera" which means hunchbacked and is also the root for the word "gibbous" that is often used to describe the phase of the moon just before or after a half moon.

This specimen came from an old estate collection of fossils that were collected in the 1960's to 1970's from the Haragan Formation at White Mound, OK. The Haragan formation is thought to range from the upper Silurain, 418mya, to the lower Devonian, 411mya ( Pridoli to Lochkovian). This would correspond to the Birdsong shale of Tennessee and the Helderberg Fauna of New York, Pennsylvania and Maryland.
Posted by Dave at 12:01 AM