Mistakes made while trying to clean fossils

The Arkona formation is the basal unit present at the collecting locale known as Hungry Hollow along the AuSable river neqr Strathroy, Ontario, Canada. The formation is primarily composed of a shale that has a high percentage of clay. The formation breaks down quickly in the presence of water and when it rains the slopes that form on the formation become very slick and sticky. There are some terrific fossils that can be found it it but you have to quarry the shale when it's fresh and NEVER GET IT WET!

Want see what happens to the Arkona formation shale once it gets wet? I learned a good lesson not long after I got home from a recent trip to Ontatio. I'd brought back a piece of the shale with a fossil in it as an example of the formation. When I found the piece it had a little bit of dirt on it and I thought I could just rinse it off. Before the rinse you can see a partially pyritized Bactrites and a pyritized worm trail in a fairly solid piece of shale. 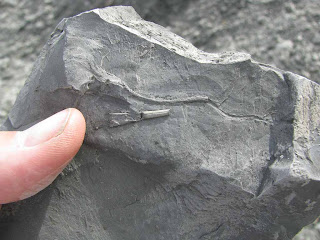 And here it is after I quickly splashed it in a bucket of water and then took it out. The transformation took place before my eyes like a science experiment and I am not kidding when I tell you that this picture was taken maybe a minute after the piece got wet. 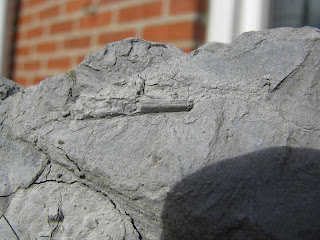 Side view of the once solid shale 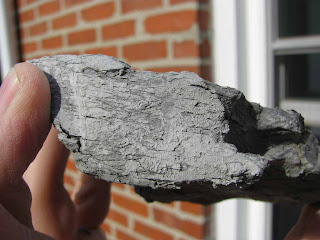 Lucky for me this was not a prize specimen or something I really wanted. Within a few minutes the whole rock was cracking apart as the clay absorbed the water and expanded. Since the clay quickly absorbs the water, only the surface of the formation is like this. If one were to dig into the slopes that line the river and extract chunks of the shale it would be stable. I'm told by my friend Joe (click here to see some of the Crinoids he's found from Hungry Hollow) that the only way to explore or prep the rock is with tools and then it needs to be sealed.

Epilogue: Here is a picture taken a few weeks after I left the rock outside to finish eroding. You can see it's lost most of it's color and shape as well as mass as the rain has washed it away. The pyritized Baculite has since fallen off to the side. 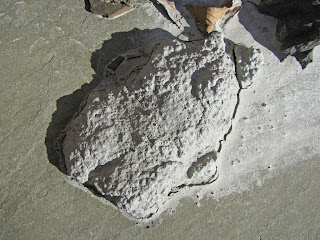 Email ThisBlogThis!Share to TwitterShare to FacebookShare to Pinterest
Labels: Arkona, How not to clean your fossils