I'd like to introduce my newest "favorite" rugose coral: Lophophyllum. 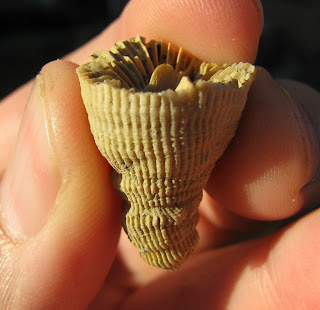 This is a cool Rugose (or Horn) coral that differs from it's cousins in that it has a "pseudo-columnella" in the center of the calice (or cup). 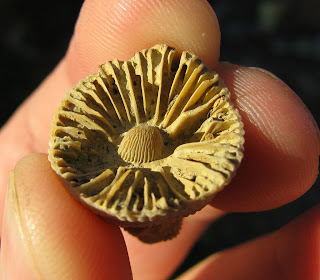 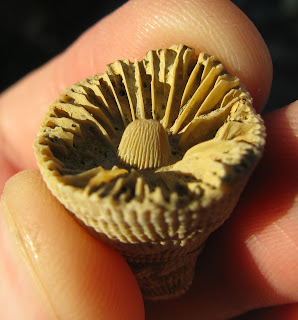 You can see that the pseudo-columnella is not round as one might expect being that the coral itself is round along the edges. Instead it is laterally compressed and very nearly flat with a wrinkled surface. Presumably the coral used it for further suppport for it's body and studies(1) have shown that, while not connected to all the septa, it erupts from one of the septal blades early within the calice. Here is a specimen that is missing most of the calice and shows the pseudo-columnella more clearly. 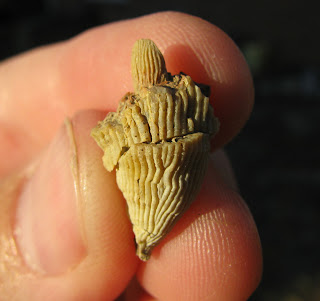 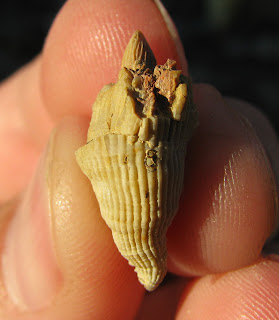 The genera is present for only a short time during the Carboniferous (Tournaisian to Kasimovian) so the pseudo-columnella must not have given it any particularly notable advantage.


The specimens photographed for this post are Lophophyllum proliferum and came from the Finis Shale member of the Graham Formation. Both were found in North Texas and only recently came to my attention when a friend from The Fossil Forum, "Roz", posted a picture of them on the forum and asked what they were. They came into my possesion when she sent a few specimens to me along with some other fossils from the formation. Another specimen came from another acquaintance from the Forum, "Tommy Walnuts" via a trade. Thanks to both of them for giving me some new specimens to think about.