Spongophyllum sp. coral from the Martin formation of Arizona

I found a few specimens of a colonial rugose coral with some really deep corallites in the Martin formation north of Payson, AZ. At first I thought they might be Hexagonaria sp. but the cup depth is much greater than that genera. So, after researching a bit more, I think I have Spongophyllum sp. specimens. Here is the description for the genera that Ermin C. Stumm wrote in his paper "Upper Devonian Compound Tetracorals from the Martin Limestone", Journal of Paleontology, Vol. 22, No. 1 (Jan., 1948), pp. 40-47:


Phaceloid, subcerioid, and ceriod corals composed of cylindrical, subpolygonal, or polygonal corallites. Septa of two orders, major and minor of which the former are of variable length and the latter short or lacking. The septa are thin and are separated from the peripheral wall by a small, irregularly developed lonsdaleioid dissepimentarium. The tabularium is composed of tabulae that are usually large and complete. The peripheral dissepimentarium is composed of a single row of vertically disposed, elongated dissepiments. The dissepiments may overlap or double up in certain areas and may be discontinuous in others.

I'll be honest, I have no idea what much of that means. After doing a bunch research with dictionaries, and Google.com, this is how I translate that description:

Individual corrallites are round to slightly polygon shaped and can be columnar with slight separation or joined together with common walls. Vertical septa lines vary in length with occasional smaller lines between. The septa are thin and separated from the outer wall by small, irregularly developed, blister like skeletal walls. The colony is composed of corallites that are usually large and complete. The outer wall is composed of a single row of vertically arranged, elongated skeletal walls. The skeletal walls may overlap or double up in certain areas and may be discontinuous in others. 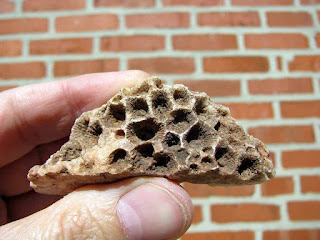 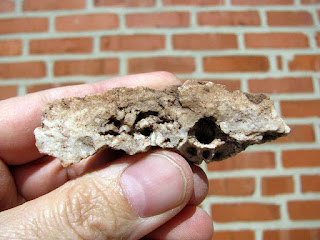 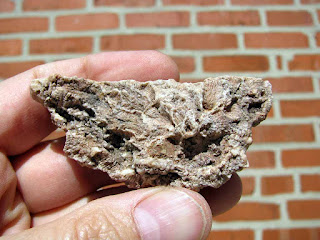 Profile of the unbroken (edge of the colony) side 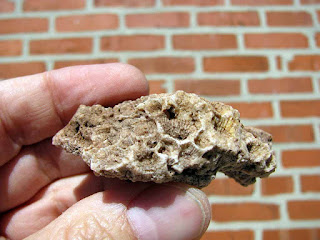 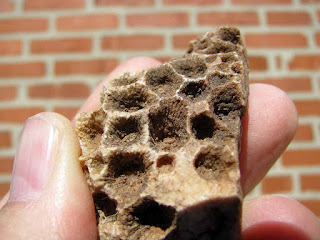 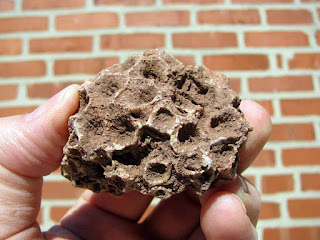 Same view, just rotated 90 degrees. The rest of the fossil was not terribly photogenic. 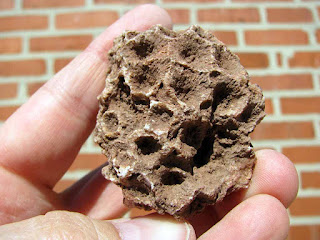 These specimens are from the Jerome member of the Martin formation (Devonian, Fransian stage) north of Payson, AZ.

In addition to Google.com and the dictionary, I used the following references to identify these specimens:

- A helpful powerpoint with coral anatomical terms and examples from Dave Krupp's website.
- The website Corallosphere.org where I was able to figure out some of the technical terms that Stumm used in his descriptions.
- Langland, Jeffrey O. and Edith V., 2012, "Fauna of a 400-Million-Year-Old Coral Reef in
Arizona", Rocks and Minerals, 87:1, 40-44