Another new trilobite genera for me, from the Verulam formation, is Thaleops. I found two specimens on my last trip up to Canada.

This first specimen is a somewhat complete cephalon 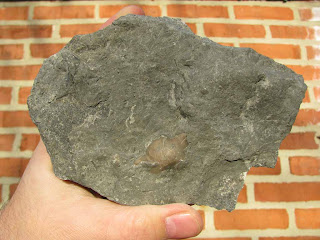 A closer view shows the glabella. the body would have extended back towards the top of the picture. 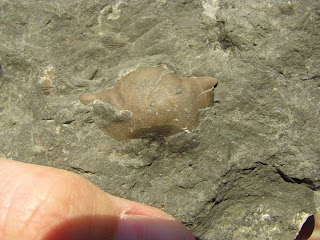 A view looking at the back of the Cephalon. 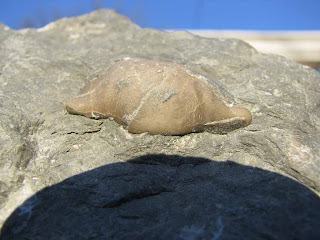 The second piece I found was an isolated glabella. 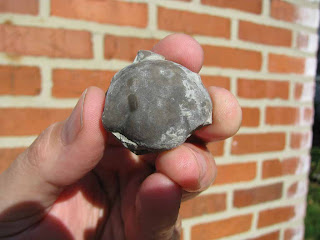 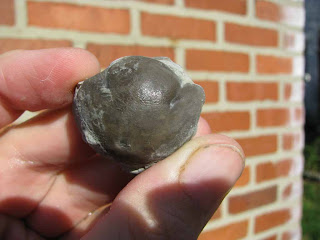 Both specimens were collected from the Verulam formation (although at different levels) which is Ordovician (Katian/Mohawkian stage) in age.

My friend Kevin has a nice specimen, that he found in the same quarry as my specimens above, of what he called Nanillaenus in his gallery on the Fossil Forum.

There is some debate about Thaleops and Nanillaenus and which is a proper name. I found a paper from 2004 published in the "Journal of Systematic Paleontology" that synonimizes Nanillaenus with Thaleops. See the link below:

A SYSTEMATIC REVISION OF Thaleops (TRILOBITA: ILLAENIDAE) WITH NEW SPECIES FROM THE MIDDLE AND LATE ORDOVICIAN OF OKLAHOMA AND NEW YORK
By Lisa Amati and Stephen R. Westrop (2004) from the Journal of Systematic Palaeontology, Volume 2,
Issue 03, September 2004 pp 207-256
Posted by Dave at 12:01 AM