This is the last of my posts regarding the fossils I found in the quarry at Roseburg, Pennsylvania. It's a large internal mold of the pedicle valve from what I believe is a Megastrophia. I base this ID on the sheer size of the fossil as there are not many other genera that attained the size that Megastrophia did. 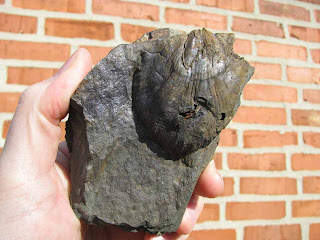 A closer view of the fossil. You can see the beak like area where the muscles for the pedicle were attached. The pedicle muscles were what the brachiopod used to anchor itself to the sea floor 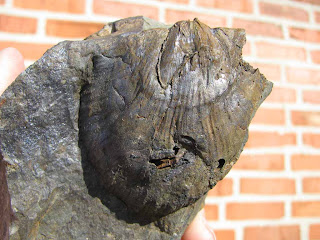 The muscle scars are well detailed and you can see what looks like a worm tube or bryozoan that grew on the interior surface of the shell as it laid on the sea floor. This implies that the shell was exposed on the surface of the sea bed before being completely buried. You can also see small stipples or pits all over the fossil. Presumably these were attachment points for other muscles in the shell. 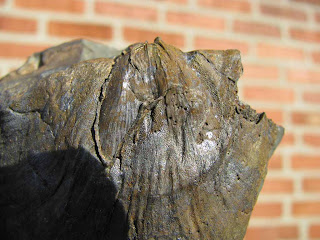 I've written about Megastrophia before that I found in the Silica Shale near Sylvania, OH. The specimen in this post came from the Mahantango formation which is from the middle Devonian (Givetian stage).
Posted by Dave at 12:01 AM