In 2009 I was able to visit a site that had tantalized me as a youth, the fossil beds near Farson, WY. They were a part of the same Eocene lake system that formed the Green River Formation and contain the same fauna (fish mainly) that can be found at the famous quarries near Kemmerer. The difference is the rock which is a very fine grained shaley limestone as opposed to the pure limestone found farther east in Kemmerer. This is a piece I bought years ago that came from the Farson locality. It features a large number of Knightia sp. fish all grouped together in what is called a mortality plate. The fish were all killed at the same time possibly by water temperature changes or sudden drops in the amount of dissolved oxygen. 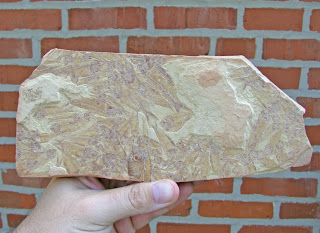 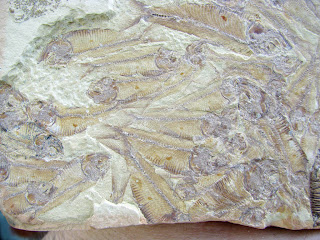 Notice how the fish are very finely detailed and stand out from the rock.

The site is out in the vast plains of the Sweetwater Valley north of the town of Green River. As I was driving to the site I was expecting small quarries like those in Kemmerer but what I found was a relatively flat featureless plain spotted with Sage. 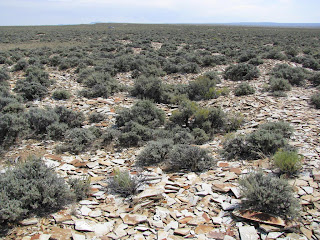 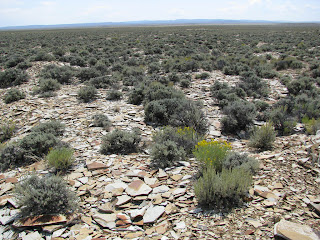 It looked to me that things had been confined to small scale digging in the immediate surface layers as evidenced by the large amount of scattered rock slabs. The heyday of this site was in the 50's to 70's before the government came in and put a ban on collecting vertebrate fossils on federal land. The site is in the middle of a vast area of BLM (Bureau of Land Management) jurisdiction so no collecting for me.

I poked around a little in the old, weathered slab piles to see if I could find anything that had been cast off and did find a few bits. 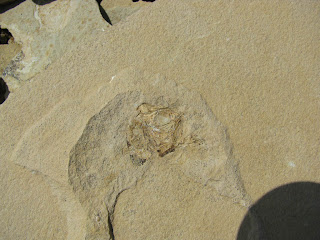 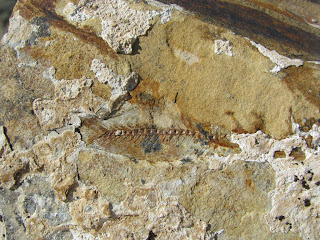 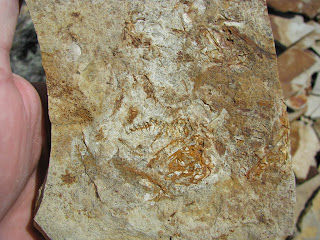 This was probably the best piece that I found. I like the contrast of the rock's patina with the partial fish fossil. 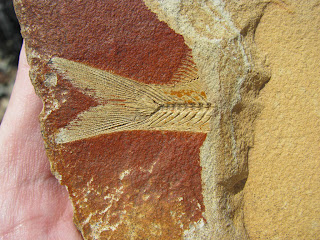 I left the pieces I'd found and had to be content with the pictures I had taken. It's too bad they don't allow collecting here but if it were otherwise it culd be overrun and depleted by commercial collectors very quickly.
Posted by Dave at 12:01 AM