I was going through pictures I took a few years back while visiting Capitol Reef National Park in Utah and found this image of the Jurassic aged Navajo Sandstone. 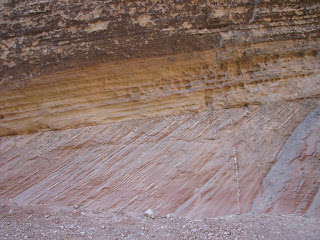 It's the wall of a narrow slot canyon and you can see cross bedding which has been interpreted as fossil sand dunes. I especially like the disconformity that is present as is seen by the angle of the layers in the bottom half versus those in the top half. Essentially what this is showing is that the lower half formed as a set of sand dunes that became cemented (probably during a wetter interval). The cemented dunes later was eroded down to a relatively flat surface and then another set of dunes formed on top. The Navajo sandstone is interpreted to represent sand dunes that formed in a dry, arid climate such as a desert. The modern analog would be the Sahara Desert of western Africa.

Here are some more pictures of the rock formations that I saw during my visit. 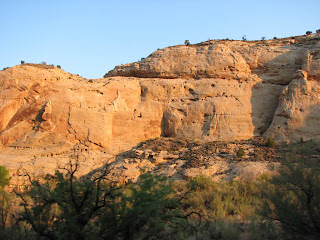 Formations such as these are what give the park it's name as the near white sandstone erodes into rounded shapes similar to the dome of the Capitol building in Washington D.C. 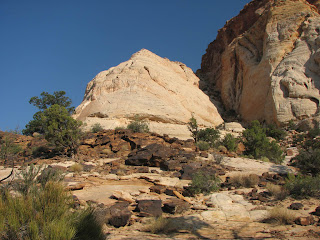 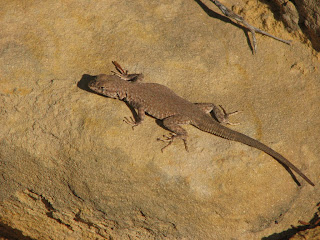 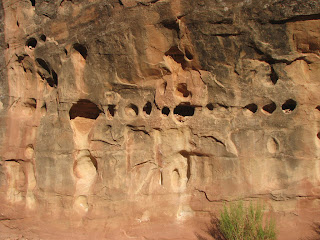 This is a typical slot canyon. Narrow, high walled and nowhere to go if a flash flood comes along. 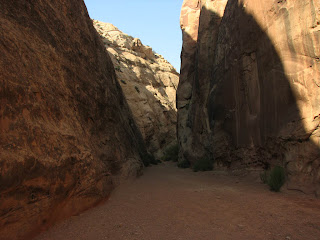 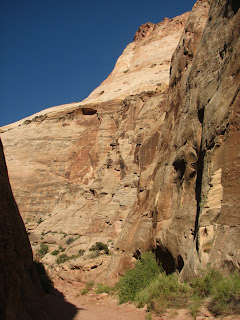 Evidence that is was not always hot and dry can be seen in ripple marks preserved in sandstone. 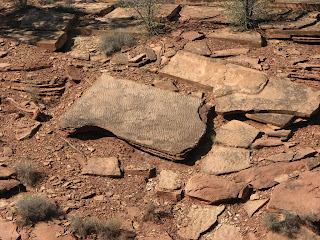 For more info about this lesser known park follow this link to the National Park Service site for Capitol Reef.

They also have a nice brochure that is available as a .pdf here.
Posted by Dave at 12:01 AM